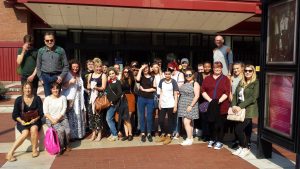 We had a fantastic day on Thursday in that London visiting the British Library with this year’s new first years. Hedley and Karen from the library gave us an insight into research using the library’s resources and a fantastic tour – our thanks go to them. While there we saw the original draft of Hardy’s Tess, Austen’s Persuasion, some Dickens and Nelson’s last, unfinished letter to Lady Hamilton (with a note on it from Capt Hardy explaining why it was unfinished). There was also a great little exhibition on punk. And we had a fantastic lunch on the sun-soaked British Library terrace.

We were whisked there (at the uni’s expense!) on the train straight into Euston (right next door to the library). The quiz on the way was won by Amy and Becky with a spectacular 46 (out of a possible 44!). I am quite concerned by the new intake’s lack of knowledge of the home grounds of London’s lower league football clubs, darts and 1970s and 80s sit-coms, but we have 3 years to put that right.

Our thanks go to the students for their great company on the day. 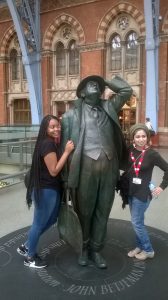 Sam and Umehra with the statue of John Betjeman – the poet of the London’s suburbs, Metroland – at St Pancras Station (which he helped to from the bulldozers)