‘Masters of Art and Sport’, currently showing at the Potteries Museum & Art Gallery, yokes together art and sport as part of Stoke’s European City of Sport 2016, with a nod to UK City of Culture 2021. This conjunction has an august heritage, as the Ancient Greeks, originators of the Olympic Games in honour of Zeus, believed in the capacity of sport to build moral character and celebrated its glories in their plastic and decorative arts. 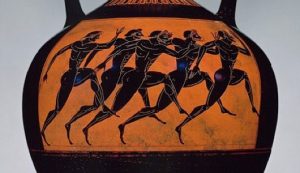 Aird, who was at one point taught by L. S. Lowry, speaks on camera of throwing off the shackles of ‘figuration’ in favour of a dynamic, performative abstraction – experiments in colour and texture – from which elements of the figurative may still emerge. 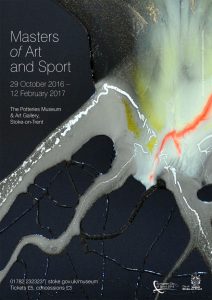 The central work was created with 2004 Olympic gold medallist, Darren Campell, for Manchester World Sport 08. It symbolises aspiration and success in the colours bronze, silver and gold, and the journey taken by both sportsman and artist in achieving their goals – in this case the technical challenge presented by Aird’s unusual chosen medium (resin and oils) applied to a dark canvas.

The exhibition of twenty numbered canvases also functions as a retrospective showcase for Aird, who died last year. 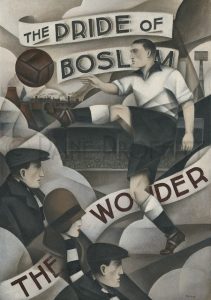 Proffitt’s work, which alludes to cubism and sometimes surrealism, here presents a nostalgic view of the Beautiful Game (though he also has a professional interest in baseball and ice hockey). Trained as an illustrator, Proffitt has recently been in considerable demand by football clubs nationally and is sold locally through the fantastic Barewall Gallery in Burslem.

These two artists may well divide taste – as did the Lowry-Berry exhibition last year. However, in this case there exists a link between Proffitt’s figurative nostalgia and Aird’s more challenging abstraction in the form of the short-lived Italian movement, Futurism (not featured in the exhibition). The Futurists celebrated not only the speed and violence of the machine age before WWI, but also human athleticism. 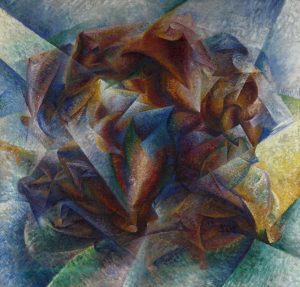 Here Umberto Boccioni’s 1913 work ‘The Dynamism of a Soccer Player’ (MOMA) illustrates this stylistic bridge. The moving figure in its environment is translated into a collection of planes and geometric shapes – the cubism alluded to by Proffitt. At the same time, the dynamism, composition and near abstraction of this image, in which elements of the figurative remain discernible, echo Aird’s more organic neuron-like shapes.

Events such as City of Sport/Culture are required to reach beyond the customary consumer and to leave a legacy. A paying art exhibition does not necessarily do this, though here the organisers have recruited four Ambassadors of Art and Sport to spread the word. What it does do is to lead the viewer from a thoroughly accessible art form to a more intellectually challenging one. One can also discern a grander aspiration to re-establish the more comfortable relation between sport and high culture enjoyed by classical civilisation. Good luck!