We were at the New Vic this week for Broadsides’ production of Priestly’s When We Are Married. First Year students Lynn and Cathryn give us their reviews of the show below, and you can get a taste of Broadsides’ very particular northern-ness and their take on Victorian farce here:

Our English and Creative Writing group had the pleasure of attending The New Vic Theatre in Newcastle Under Lyme, to see the Northern Broadsides perform JB Priestley’s When We Are Married. Many of the cast were easily recognisable from various television dramas and soap operas, so we immediately realised we had come to see something special. The New Vic Theatre is a theatre in the round and so there were little effects and props used throughout the entirety of this performance. However a variety of early 20th Century chairs, tables, ornaments and whiskey decanters were used in the staging and this was ample to create a lively living room area. The play is set in the early 1900’s and manifests itself around three married couples – the Halliwells, the Parkers and the Soppitts. This particular evening they were celebrating their 25th wedding anniversary as they all got married on the same day, at the same church by the same Vicar. However their evening of celebrations was set to be ruined as there were speculations that the Vicar who married them was not in fact official. This set off a fast-paced, comical chain of events; with a hint of regular disruption from visitors at their door. The three married couples were left wondering whether they were actually better off free from their ‘institution’ of marriage. With their high social standings in jeopardy and bitter home-truths been outed, the three couples eventually joined forces to discover the legalities of their marriage. When We Are Married is a light-hearted comedy that can be appreciated by all ages. Our group thought that the men in the married couples stole the show. They were charismatic, witty and showed us their humorous side to their equally different personalities. This was JB Priestley, performed at its very best. (Lynn Statham)

The Northern Broadsides theatre company presented JB Priestley’s When We Are Married at the New Vic Theatre in Staffordshire. Set in the fictional, northern town of Cleckleywyke just after the turn of the 20th Century, three couples who married on the same day, in the same church, by the same parson are about to celebrate their 25th wedding anniversary. Set around the living room with chairs for the ladies, sherry decanters in abundance and a door for listening at, the celebrations quickly turn sour by the discovery that the parson wasn’t licensed to marry them and they have in fact been living in sin ever since.

The horrified couples suddenly realize that they will become social pariahs and laughing stocks if the news of their predicament gets out. Cue hilarious attempts to keep the news secret: firstly, from husbands to wives, then from the formidable ex-housekeeper Mrs Northrop, who is adept at listening at the key hole.

When it looks like matters cannot get any worse, the local newspaper photographer turns up to take a group photo in celebration of their anniversary. Barrie Rutter, director of the play, delivers an excellent comedic turn and believable drunk as photographer Henry Ormontroyd.

As the couples try and sort out the quandary they have unwittingly found themselves in, each of the characters comes into their own and the tables are turned between each husband and wife.

A rousing song at the end closes an excellent production by the Broadsides.

To Liverpool last Wednesday, originally to get some live-experience of Pre-Raphaelitism (on our list of topics in my Level 5 and 6 module Painting the Town Red), through sampling the holdings of Pre-Raphalite paintings in the Walker Gallery, around the corner from Lime Street Station. However, we broadened out the brief of the trip by opening it up to all English and English and Creative Writing students on our Staffs Awards. Also, we did not just do the Walker Gallery, but also Liverpool Central Library, Tate Liverpool by the Albert Docks, and much this, that, and the other besides …

As it turned out, we ended up a fairly small, but perfectly formed little throng of 15 +, a cross-section of really nice people from all study-levels, with some joining us along the way, and also leaving at various stages of the programme, for one urgent reason or another. (One student had actually gone to the length of driving up with her lil’ toddler son to meet us at Lime Street station; she had to leave half way through, but – as we heard from  her the next day – spend more than 5 hours on the motorway on her way back: so not lucky!). A sizable part of the group made use of the opportunity to check out the watering holes and eateries in up-town Hope Street area, after the bugle had been sounded that ended the official part of our venture. One of these night birds, at the ‘Career’s Fest’ next day (a man, who shall remain nameless), had the deep bass-baritonal timbre of voice that normally follows a bout of alcoholic abandon….

At the station we were also joined by Greg, one of our Level 5 ‘mature’ students, dyed-in-the wool scouser and guide extra-ordinaire from whose expert knowledge we beneffitted all day long. He led the way, and also led by mature example as some of us frequented the more insalubrious establishments of town, in between watching the High-Art display in the two Galleries, and then later into the night….

After coffee we looked around in the Walker, starting with C19 Victorian painting. Their Pre-Raphaelite holdings are not as extensive as in he Birmingham or Manchester galleries, but we saw a couple of paintings which we had actually discussed in class, particularly Millais’s Isabella; remarkable also, a picture that we had not so far looked at on the module, one of my favourites, Brett’s Stonebreaker, which exemplifies the Pre-Raphaelites’ obsessive attention to meticulous detail (the picture shows an abundence of plants, all botanically identifiable, and much geological detail): ‘truth to nature’ is the motto; the human, here labouring, part of the cycle of things; Darwin’s Theory of Evolution is in the air…

We took the above group picture on the Viewing Platform on the top floor of the modern new part of the library, whose interior compares very favourably with the new Birmingham Library, but here, of course, the modernist interior design is very well hidden behind the early C19 facade behind which it is inserted, whereas part of the splendour of the Birmingham Library is also in its multi-culturally inspired exterior design: Orienalising (?),  filigree….

Greg then led the way through town towards the Albert Docks. We got a good whiff of the Mersey sea air (with the weather wildly oscillating between misty, rainy gloom and bursts of sudden sunshine). The tide was half in, and the water over to the Birkenhead shore was like a grey mirrror, reflecting clouds and the high buildings on the other side. 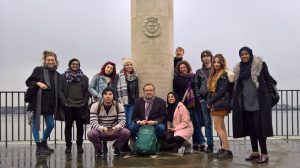 Some of us went for a liquid pub lunch, others for more solid food in the Gallery’s café. 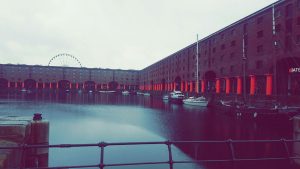 Tate Liverpool had provided us with a living guide, who, for a fee (Mel, extremely kindly, forked out on all our behalf!) talked us through Tracy Emin’s Unmade Bed, as an example of a ‘Self Portrait of the Artist as a Troubled Young Woman’ (very convincing!), and tried to draw parallels (perhaps not so convincing!) with the 25 or so William Blake etchings, drawings and paintings which Emin had chosen as context for her own artistic bed-statement. The Gallery has been following through for some time with their laudable project of connecting conceptually seemingly very different art works by exhibting them side-by-side.. With Blake and Emin (Mel and I talked about it afterwards) we were not so sure whether the connection worked, even though the guide, John Hughes, did his best to draw out the links. For example, the contrast of the soft toys by the side of Emin’s bed with the depressing adult chaos of the bed he connected with the contrast of Innocence and Experience in Blake’s poetry and painting. (He also interspersed his substantial talk with amusing limericks of his own making characterising ‘the essence’ of various artists: Pollock, Dali, Emin, Blake, etc..) In any case: both the Bed and the Blake were well worth looking at. 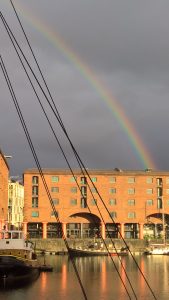 All in all, a good day out with very nice things to do, in the company of very nice people (on an otherwise depressing day, with Fascism looming in the Anglo-American world).

I enjoyed myself tremendously. 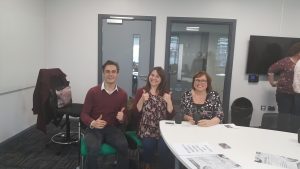 The speakers brought a wealth of diverse topics to the panel, which in turn generated many helpful questions from the current undergraduates in attendance.   Having attended the careers talks this week and last, I can see several important linking themes emerging, which I shall summarise here:

The talks were – obviously – much richer than this list can indicate.  We are very grateful to our alumni for returning to pass on their pearls of wisdom and inspire our current undergraduates with a lot of food for thought. 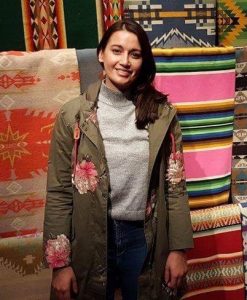