Harriet is a 3rd-year nursing student. She recently travelled to Kandy in Sri Lanka on a nursing elective to see the differences between healthcare in the UK and the developing world.

My trip to Sri Lanka was a fantastic experience from start to finish.

The day after we arrived, we visited our placement hospital. We were introduced to all the staff we’d be spending time with and went on a tour of the hospital itself.

To start with, I spent time in the general medicine department. The sister in charge and the nurses were all friendly and welcoming to me. During my time there I saw patients with cardiovascular disease (one of the top causes of mortality in the country), strokes, diabetes, and chronic kidney disease. There was even a ward that catered to dengue fever—a tropical disease I’d never seen before. 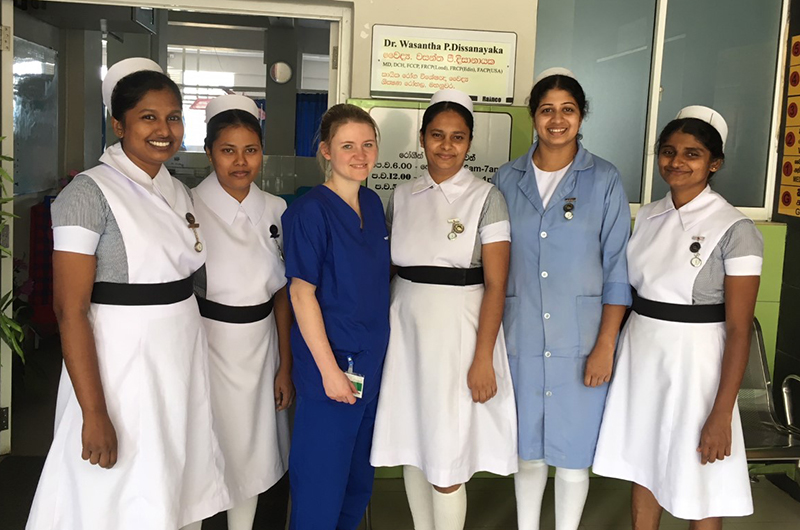 I found it fascinating to see how Sri Lanka and the UK differed when it came to treating these conditions. I asked the nurses what preventative measures there were for dengue fever. They told me that people were simply advised to wear repellent and long-sleeved clothing.

I spent time in OBG during my second week. It was a chance to see things I’d never seen before, and I loved it. I met Sri Lankan medical students, doctors and nurses and they all enhanced my learning.

I remember observing one patient who presented symptoms of preeclampsia, and it was arranged for her to have an emergency C-section. Speaking of which, I observed more than one C-section taking place in surgery. I also observed a gynae surgery called the ‘Manchester operation’.

I spent a day in the hospital’s lactation management centre too. While I was there I met mothers who’d had problems breastfeeding. One mother had given birth to triplets at 27 weeks. Sadly, one of them had passed away. Her twins were at two months old, but tiny.

At weekends we explored Sri Lanka. On our first weekend we went to the beach at Kalpitiya, and then to Wilpattu National Park for the day. In the national park we watched elephants patrol the lake, spraying water over themselves. We saw lots of other animals too, like birds of prey and lizards.

Exploring Sri Lanka’s cultural triangle was high on my bucket list. We visited the ancient cities of Anuradhapura, Polonnurwa, Dambulla and Sigiriya. We visited ancient ruins, Buddhist monasteries, and a number of beautiful stupas.

In Sigiriya, we climbed the steps leading to the top of Lions Rock. We were rewarded with breathtaking views. On another weekend we climbed Adam’s Peak and then went to Trincomalee. It was beautiful there, and our hotel was on a paradise beach—clear blue sea and white sand.

In the afternoon we travelled across to Pigeon Island. We went snorkelling around the island, swimming with exotic fish I’d never seen before. The next day, we walked to Fort Frederick and visited Koneswaram Temple—the Hindu temple on top of the fort.

There was always something to see or do in Kandy itself (this is where the house was based). The Royal Botanical Gardens were beautiful—there were a variety of plant species ranging from boreal trees to Burmese Bamboo.

We also visited the Temple of the Tooth, and learnt about local Buddhist history. It’s said that the Buddha’s tooth is kept here! The White Buddha is incredible and there were spectacular views from the top—we could see right across the city.

One afternoon, a Sri Lankan Medical student kindly showed me around the University of Peradeniya. The campus was beautiful and I remember seeing a willow tree with striking yellow blossoms. We also watched traditional Kandyan Dancing accompanied by traditional drumming.

I would absolutely recommend Sri Lanka. I loved it all. There will always be a place in my heart for this country.

Work the World specialise in tailoring overseas nursing placements in Asia, Africa and Latin America. Their destinations provide eye-opening insight into the challenges associated with delivering healthcare in the developing world.