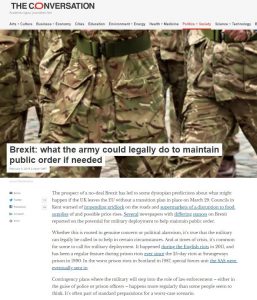 “The prospect of a no-deal Brexit has led to some dystopian predictions about what might happen if the UK leaves the EU without a transition plan in place on March 29.

Several newspapers with differing stances on Brexit reported on the potential for military deployment to help maintain public order.

Whether this is rooted in genuine concern or political alarmism, it’s true that the military can legally be called in to help in certain circumstances. And at times of crisis, it’s common for some to call for military deployment.”