Danielle Hackett is going into her second year in the BA Criminal Justice with Offender Management degree. She has been volunteering at Change, Grow, Live (CGL) and has written a post for us detailing how valuable she found the practical work experience opportunities. 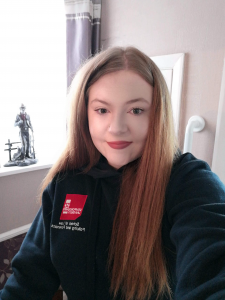 Jade Taylor, a former student, is regional manager for CGL and several of our BA Criminal Justice with Offender Management currently volunteer on this programme.

I am starting my second year of Criminal Justice with Offender Management in September. In my first year of the course, I decided to become a volunteer for CGL (previously SOVA). CGL is a rehabilitation charity which works with offenders and ex-offenders in and out of prison, to help them to lead positive lives. In my role I work with the offenders whilst they are in prison serving their sentence and also when they get released from prison by mentoring them. I also pick up offenders on their release dates and support them throughout their first days out, as the first day out is always the most important. I also volunteer at probation, where the ex offenders can drop in and speak to us about an problems or queries they may have and I have recently had some amazing opportunities given to myself.

The first opportunity I had was a tour around YOI (Young Offenders Institute) Brinsford in Wolverhampton. That was the first ever YOI I had visited and I was stunned to learn that there was over 100 adult males also in there, even though there were 2 adult male prisons also on the site: Featherstone and Oakwood. The tour was very interesting and insightful, I walked through the ‘first night’ cells, where one half of the offenders were quiet and the other half were loud, banging on the doors and shouting abuse. I also got shown around segregation, where there were around 10 inmates locked up for things like fighting and at least half were on an ACCT. They had an education building, where the offenders were taught how to cook and they had gardens where the inmates were building a bigger pond. There is no therapy at the prison, therefore, I believe some inmates themselves used working on the garden as some kind of therapy. On res 5, the prisoners were trusted and so they had keys for their own rooms. The prison as a whole was more old fashioned than other prisons such as Dovegate.

The second opportunity due to my volunteering role which I have landed is being offered to be key trained at one of the prisons. Every second week, I will be based in one of the prisons, where I will be meeting with the male offenders, informing them about CGL, what we do, how we can help and generally answering any questions they have. Due to that role, the prison suggested that being key trained would benefit me, this involves 5 days of training and self defence.

Without volunteering I would not have had these opportunities, it is amazing being able to put everything we learn on our course at uni, into practice.