Students said the trip was ‘practical’, ‘informative’, ‘well-organised’ and provided them with ‘new information regarding roles, qualifications and who does what in the lengthy process’.

On 14th June 2017, a group of fast track LLB students from Staffordshire University visited Manchester on an organised court visit. 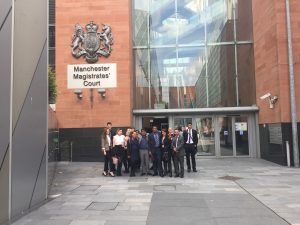 In the morning, they visited Manchester and Salford Magistrates’ Court. They were met by Kirsty Pomfret (Court Staff Team Leader) and Mr Larry Collier, who is the Chairman of the Bench of Greater Manchester. The students were told about the number and type of cases that were heard at the court each week and about the role and qualities of a lay magistrate.

~’Excellent day out for anyone who is considering becoming a barrister or solictor. It gives you insight about the real world of law and lawyers’~

Following the morning session, District Judge Goozée spoke to the students and offered advice to the aspiring lawyers. He provided an interesting insight into his role and noted factors such as the importance of body language within the courtroom. 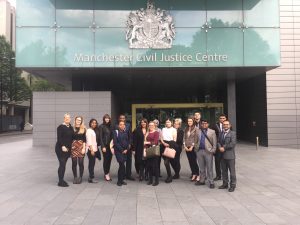 ‘It encouraged me to think about future employment in court’

In the afternoon, the students visited the Manchester Civil Justice Centre. The Supervising Usher, Janet Ogden, greeted the group and provided some interesting facts about the court building and the history of the profession. They were then taken into a large courtroom to meet the designated civil judge, His Honour Judge Gore QC. HHJ Gore QC explained the type of cases that he heard and emphasised the importance of good preparation by the advocates.

Finally, the students had the opportunity to observe a floating fast track trial. Unfortunately, the hearing was adjourned due to various issues, including the lack of court time. However, the barrister for the second Defendant, Richard Livingston from Kings Chambers, was kind enough to speak to the students afterwards. He set out the facts of the case and explained the very interesting legal point that had arisen. He also took the time to answer questions about being a barrister and the skills required to succeed. 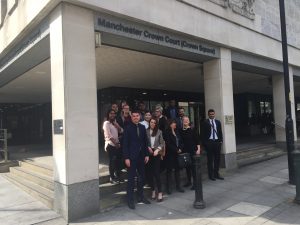 ‘Larry Collier (Magistrate) has emailed me twice with useful information’

Overall, this was a fantastic opportunity for the students to see the law that they were studying in action. It also allowed them to reflect upon their own career aspirations and employability.

~‘The day out was great for team building amongst us students’~

Staffordshire University would like to thank all of the court staff and practitioners who gave up their time to share their knowledge and experiences. In particular, we would like to thank Kirsty Pomfret (Manchester and Salford Magistrates’ Court Team Leader) and Jacqueline Healy (Operations Manager, Manchester Civil Justice Centre) for coordinating the visit.