This event, sponsored by the CILIP Information Literacy Group, took place on 4th May 2017. We wanted to ask librarians and information professionals about their experiences of how political campaigns use messages, slogans, stories and statistics to persuade voters. Information Literacy skills can be employed to dissect the messages and uncover what truths may lie within them.
“Information literacy is knowing when and why you need information, where to find it, and how to evaluate, use and communicate it in an ethical manner.” (CILIP, 2015) 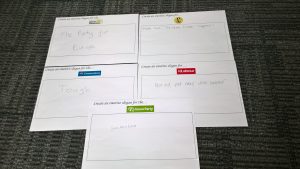 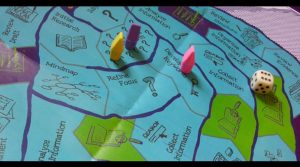 All the presentations, notes, guides and weblinks from this event are available on our libguide: http://libguides.staffs.ac.uk/teachmeets/infolit

Throughout the event, attendees were able to play the prototype ‘Writing Essays by Pictures’ game. This gave the opportunity to visualise the process of researching and writing an evidence-based essay using the format of a boardgame, The game was being funded by a Kickstarter campaign, which has now reached its target and will be produced.

Julie Adams presented on “The Power of (short) Stories… or Feelings v Facts” asking attendees to consider how short stories and slogans play on nostalgia, sadness, hope and fear. Attendees were invited to come up with a slogan of up to 6 words for the political party randomly chosen for their table. Slogans (pictured) included “Not old, not new, just Labour”, “Save Their Future” (Green Party) and simply “Tough” (Conservatives).

We were also fortunate enough to have a live Skype from Graeme Baxter and Rita Marcella, School of Creative and Cultural Business, Robert Gordon University, Aberdeen. They presented on “#alternativefacts – citizens’ perceptions of the reliability of ‘facts’ presented online by political parties in Scotland”. They have had over 500 responses to their study and although their research is still at an early stage, so far they can say that factors affecting trust in ‘Facts’ include:
Levels of trust in politicians in general
Levels of trust in specific politicians or parties
Political allegiance – e.g. 74.5% of SNP supporters felt the SNP facts were very or quite reliable (cf. 44.8% of entire sample)
Perception that ‘facts’ will be biased in some way, or subject to some form of ‘spin’
Whether or not the source of the ‘facts’ has been given
Respondents’ professional or personal experience, particularly in relation to education, healthcare and childcare.
Rita and Graeme intend to publish their full findings later this year.

There was then a discussion of the Information Discernment component Rubric Geoff Walton from MMU has been developing and details about the ILG Research Bursaries.

Finally, Eleanor Johnston from Staffordshire University talked about her experiences blogging from the US in November 2016. This blog contains interviews with ordinary voters in Louisiana, Mississippi and Tennessee. Voting judgements truly ran the gamut, from “If Donald Trump is elected, it will make both parties think about what they have done to mess up America….stupidity and putting Government first” to “We don’t want to wake up tomorrow with a world full of hate”.

The event took place in the new Jisc ‘Digital Classroom ‘ (T101, Beacon Building). We tested out the Skype for Business the day before with Robert Gordon University and soon realised they were unable to connect. We had to use ordinary Skype (you are unable to share your desktop) which we had to download. We had to connect by phone as there was no audio from our end, but this was fine. Generally, it was a positive experience despite our lack of experience in the room. Good things were being able to display on all of the screens around the room and it seemed easy to switch from displaying the main screen to the tables’ own. Some people used the screens on the tables and seemed to use these easily, although some struggled a bit more. Visualizer worked well too and we were able to display documents from each group. Something to note was not being able to annotate the PowerPoint slides as we had hoped to. Also it was a shame that there was no kit on the podium. We had to bring our own, and it seemed to need an up to date machine. John Erskine was in the room just before us with his students, so we were able to use the library issued laptops for attendees to use the Via Kramer App.

On our feedback forms, under the section ‘What did you find most useful / any other suggestions’, these are the comments that directly related to the classroom:

These were good to hear as essentially our session was about Information Literacy and Voting Judgements, but the upshot of taking the plunge with the digital classroom was a positive experience and we were pleased we went for it.