A session lead by two members of staff at the Centre of Archaeology took place at the World Archaeology Congress in Kyoto, Japan this week. 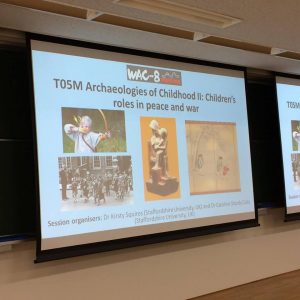 “Archaeologies of Childhood number II: Children’s roles in peace and war” included papers that aimed to promote the value of studying children in the past and to facilitate greater discourse between scholars. The session, co-organised by Dr Kirsty Squires and Dr Caroline Sturdy Colls, explored the roles of children during peaceful times and also during periods of conflict.

It featured four papers showcasing the wide range of ways that children were assigned and, indeed, forged their own identities in periods of peace and war in the past.

Ben Hinson started the session by considering ascribed and self-ascribed identity of children at the site of Deir-el-Medina in Egypt during the 2nd millennium B.C. The concept of different types of identity offered a new perspective on the archaeology of childhood.

Nana Nakayama then went on to consider the relationship between the health of children and the ways in which they were buried during the Edo period in Japan. Her presentation explored how the health and funerary treatment of children changed as a result of increased social stability following a period of war and conflict.

Dr Kirsty Squires then explored juvenile weapon burials from early Anglo-Saxon England and considered why individuals were buried with military accouterments and what they can tell us about their identities in life and death.

Dr Ben Raffield discussed martial influences on childhood development in Viking-Age Scandinavia and how violent ideologies drove individuals to participate in conflict from a young age.

Finally, Dr Caroline Sturdy Colls’ paper was presented (in absentia) and this focused on the presence and absence of children in Holocaust-era material culture and what this evidence can tell us about the experiences of children during this period of history.

Find out more about the World Archaeology Congress Conference 2016.