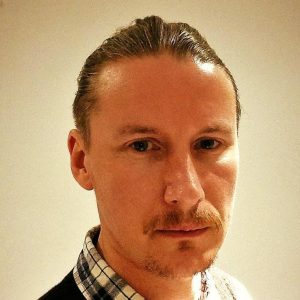 Michael is a senior lecturer and course leader for the BA (Hons) Fine Art course at Staffordshire University. He teaches across a range of mediums focusing on Sculpture, Installation and Film. His main interests are material culture and how objects and artefacts can change our understanding of the past. Most recently this has developed into more philosophical debates about how we deal with new archaeological findings that challenge established historical narratives, and how we can use artistic responses to create the debates needed to deal with these complex and contested memories. His work has exhibited nationally and internationally and received funding from a variety of Art and non-Art organisations.

Branthwaite, Michael and Sturdy Colls, Caroline (2015) ‘Finding Treblinka’ Exhibition Book/ Publication to accompany exhibitions at ‘The Museum of Struggle and Martyrdom’ Treblinka,Poland and the ‘The Wiener Library’ London, England. [Show/Exhibition]