In 2012, a programme of archaeological survey methods was completed at The Nunnery, an important multi-period site overlooking the island’s picturesque Longy Bay, to complement the ongoing research by archaeologists from Guernsey Museums and the Alderney Society. Structures at the site span many centuries and range from a 4th century Roman Fortlet to a Second World War stronghold. The work carried out by students and staff from Staffordshire University focused on producing an accurate plan of the site using a combination of GPS and Total Station recording. 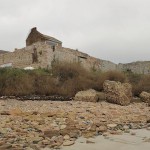 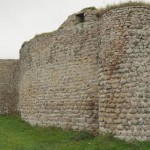 Although excellent plans of the site already exist, the majority of these were drawn from ground measurements and aerial photographic annotation. Although useful, they do not, however, produce accurate drawings that are to a set scale.

Once the work to create an accurate site plan had been completed, it was followed by a series of geophysical surveys, specifically Ground Penetrating Radar and Resistance Survey, carried out both inside and outside of the Nunnery. The principle aims of the surveys were to identify any buried archaeological features that may be targeted for archaeological excavation. In particular, it was hoped that the GPR survey inside the structure would reveal the line of the buried sections of the central Roman tower.

The GPR survey was highly successful and highlighted several interesting anomalies that may, with further data processing, highlight probable features. The remains of the central tower were clearly visible at depths from 0.5m to 2m. Other features included linear anomalies outside of The Nunnery and features that probably represent recent services (drainage and sewers). There was no indication of a buried Roman road or trackway in the vicinity of the current Nunnery entrance (at a depth of the 1.5 to 2m). Geophysical survey work will continue at this site in future years.

Read about the Ancient Archaeology of Alderney project