Fringe Festival 2013 was a mammoth 4 weeks long and
more than 1000 people took part!

Student guides gave regular Degree Show tours to many people who have never set foot on University land before, but live two streets away. This year’s Art and Design Degree Show opens to the public on the 14th June 2014. 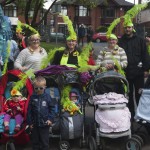 B Arts are our main Festival partner again, running kite making and animation workshops in Shelton over the next few weeks. Get involved and you can take part in the community parade and activities at the Fantastic Fringe Finale this year on the 21st June.

2013 the Amazing Camera Obscura was open for three days attracting more than 300 people including many school and college students and passing visitors. The most common response to it was “wow!”. David Noble’s talk on Friday evening took the camera obscura as its inspiration and attracted 35 people, who found it “both affirming and inspirational!”

Look out for David’s photography talk this year, “In the Garden with Darwin” on the 19th June.

Over 80 University students and staff from every department got involved in Fringe 2013. We worked with more than 30 local organisations and it is this partnership working which makes all the difference. Find out about our Partners for 2014.