Join us for a picnic in Hanley Park

Meet your neighbours, play games and watch performances on the bandstand. 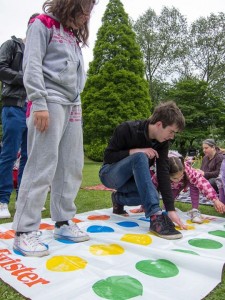 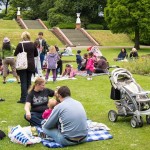 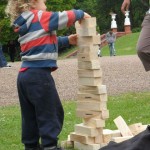 Active Uni will lead some team games, so get ready for the fun.

There will be activities for all the family, supported by Thomas Boughey Children’s Centre. 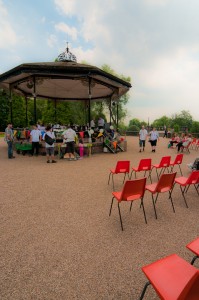 Park Live! means you can take part too. If you have a skill to show off – sing, dance, play, act, tell a joke, read a poem – the stage is yours. 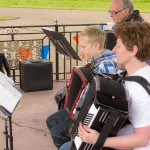 The Photographers Collective North Staffs and Staffordshire University students will join us to lead a photography walk, so bring your camera or phone and meet at the bandstand at 12pm.

Chris Oldham a Sculptor and photographer from Stoke, who graduated in Fine Art Graduate at Staffordshire University, is a featured artist at  London Road Festival this year. We asked him to tell us about his photographic art work for the festival.

I grew up living in West End, Stoke and know well the streets that feature in the London Road Festival Open Air Gallery. I wanted to show a different perspective on a familiar landscape. 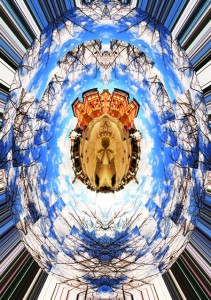 The theme of the festival ‘take another look’ works well for me as the pictures I make are all about seeing with a new perspective. The digital composites I make are multi-layered collages into which I build visual journeys or mental puzzles. My pictures ask the viewer to spend time reading the images and decoding the clues to the locations in the pictures or be absorbed in the shapes, textures and spaces inside the images. 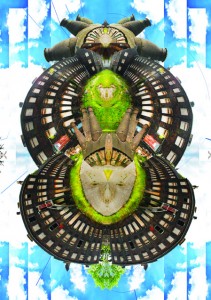 The artworks are a surreal dreamlike interpretation of the architecture of Stoke with its stylish Victorian buildings and rows of terraced housing that go on forever. Through the use of mirroring in some of the images we get a glimpse into the in-between spaces where the pictures join together, here a Psychology thing happens and we start to see images conjured from our imaginations and viewed from our individual cultural experiences. In a mirrored tree picture I see fairy folk and the face of the messiah, in the street pictures I see giant bugs and aliens, different people might see something different, that’s part of the fun of making pictures.

As an artist a lot of my work is about building great big sculptures from willow trees that you can go inside and experience the sculpture surrounding you, with the pictures I am still building an environment but it exists as a visual space that you explore with your mind and imagination.

I run a community arts company called Willowarts, building environmental art sculptures in woodlands and green spaces; we have worked with the National Trust, English Heritage, with Museums, cultural and educational centres nationwide.

A photographic exhibition by Martin Elliott, exploring the sexual orientation of people in Stoke-on-Trent and the surrounding area.

The exhibition is part of a wider project called Sex in The Potteries (SITP) which is a previously unexplored photographic exhibition examining the lives of people who are living through – or have lived through – adversity within their community.

SITP is a joint collaboration between Martin and Staffordshire University MA student Fee Wood and will incorporate photography stills, video and audio of people who want to tell their story of who they are and what they believe in without being judged and with no prejudice. 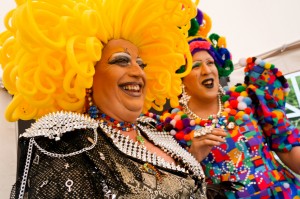 The project has been developed to allow people within the Lesbian, Gay, Bi-sexual and Transgender (LGBT) community to stand up, be proud and say ‘this is me’.

Designed to educate and enlighten, the exhibition will form the basis for a long-running exploration of people within the Midlands and further afield.

It will include sexual gender orientation including transgender, transsexual and hermaphroditic preconditions. It will also include gay and lesbian sexual proclivity amongst other associated sexual choices and predilections.

The aim of Sex in the Potteries is to educate, inform and visually and audibly motivate a generally uninformed public about the everyday barriers, social stigmas and impediments suffered by the LGBT community.

The exhibition will provide a voice for a minority whom, it is felt, are often criminalised because they are different. It will also give the general public a window into the world of gender dysphoria and the barriers that are often put up by a sometimes xenophobic public.
Martin, who has been a professional photographer for over 22 years, said: “The exhibition will highlight a section of society that our communities are not often involved with, with the intention to overcome any prejudices and preconceptions. My hope is that it will celebrate what that community can offer to society.”

Our feast of Fringe events opens with the ‘Big Lunch’ (A nationwide initiative from The Eden Project) in Hanley Park. Bring along a picnic, chairs & rugs and enjoy the entertainment provided by ParkLive!

About The Big Lunch

Of course, if you are in the mood, you can join in. Sing, dance, act, tell a joke, play, do magic tricks, it’s your chance to shine (all acoustic).

There will also be a ‘Photo Walk’ at 2pm, with Photographers Collective North Staffordshire. Bring a camera and get creative! You might also want sensible shoes and an umbrella!

No booking required. Just turn up. Some snacks and cold refreshments will be provided.

In the “Garden” with Darwin or Look happy, you’re having your picture taken!

David Noble’s talk considers how Darwin the naturalist, drew upon art and photography to elucidate his ideas, and how particular photographers made it into a new art, Pictorialism.

In 1872 Charles Darwin published The Expression of the Emotions in Man and Other Animals, a book that discussed how our faces reveal the mental actions of the self. Importantly for Darwin, was the relationship of how the human animal shared with the ‘other animals’ a common bond of gesture and reflex for all to see. With the invention of photography such ideas would take on a greater significance, as the ‘trace’ of our faces would, in a modern world of technological communication, perhaps be more of a mask rather than a revelation. This talk considers how Darwin the naturalist, drew upon art and photography to elucidate his ideas, and how particular photographers made it into a new art, Pictorialism.

This is David Noble’s second talk for Fringe, following on from the well received We Begin in the Dark in 2013.