Guests were not alone in celebrating the success of our graduates. Staff, dressed in their gowns which demonstrate their academic achievement, applauded the achievement of their former students. Speeches were given by the Vice Chancellor, Professor Liz Barnes, our Dean of Law Policing and Forensics, Sean Curley, and the Student Union Vice-President, Swetha Reddy.

Nigel Meadows, Senior Coroner of Manchester City and former LLB Law graduate of Staffordshire University was awarded the Honorary Doctor of Laws. He is also a member of the group for the National Enquiry into suicide and homicide by people with mental illness, a Director of Training for Coroners for the National Judicial College and a representative of the Coroners Society on the Forensic End Users Group.

Kayleigh Sheppard and Alison Davidson, one of Staffordshire University’s own Specialist Skills Technicians, were award their PhDs. 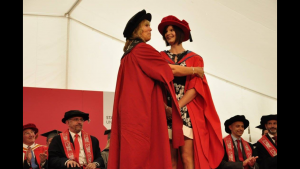 Kayleigh’s thesis was titled ‘An evaluation of the use of 360 degree photographic technology in a forensic context’.

“My thesis explored the use of 360 degree photographic technology for recording and presenting crime scenes in the courtroom and sought to validate such technology for use within criminal investigations. In addition, the research sought to adapt the existing camera technology to incorporate lighting systems to allow the detection and visualisation of biological fluids at crime scenes [and] to make such camera technology systems more versatile within criminal investigations.” 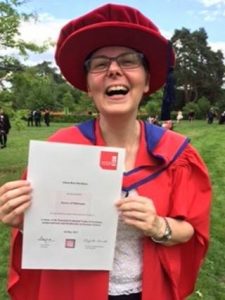 “Alison’s thesis was titled ‘A study of the Potential Evidential Value of Perfumes, Antiperspirants and Deodorants in Forensic Science’.

“I was interested in whether the aroma chemicals we apply to our skin and clothes every day can tell investigators who we are and what we do, and whether, if a suspect leaves a garment at a crime scene it could be matched to the suspect later by the smelly chemicals on the clothes and skin. As I’m still working in the Analytical Methods Laboratory I’ll be continuing to research the human chemical profile and what it can reveal about our lifestyle.” 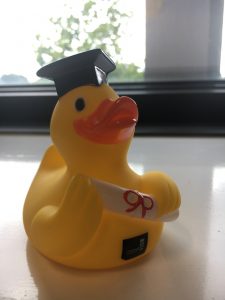 After the ceremony, celebratory drinks were had and there was no shortage of places to have a celebratory bite to eat. The sun had finally made an appearance and many took the opportunity of taking momentous photos in the scenic grounds of Trentham. The Staffordshire University merchandise also proved a great success.

Overall it was wonderful day and university staff and current student ambassadors enjoyed sharing the day. Congratulations graduates of Law, Policing and Forensics! 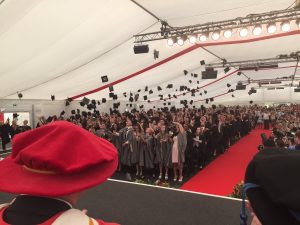