Who do you think won the race? We’d like to think it was you guys so, congratulations on making it to South Africa. Just over 11,000,000 steps away and here is where we will meet our GradEX winning fourth placement student.

Known as the rainbow nation because of its multi-ethnic society, South Africa has developed into a country rich in culture and language producing phenomenal individuals that have secured their place in history forever, most famous being Nelson Mandela. An inspiration to all his words he was able to make steps towards uniting a racially divided country with nothing other than their love for sport, so why not get active and have a game of rugby in honour? South Africa is home to many beautiful natural landmarks including Sand River in KwaZulu-Natal, being 350km long or 459,317 steps we could have walk the length of it 23 times! Whist there you may also want to visit the top-rated reserve, Addo Elephant National Park. Here you can see of course Nelly the Elephant but also the black rhino, buffalos, lions, leopards, great white sharks and sperm whales. 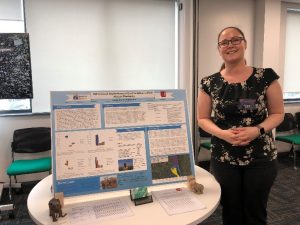 Whist on the topic of elephants this brings us nicely to recent Staffs graduate Amy Huntley who was able to follow her dream and work with Elephants. combining her placement and her final year project looking at the ‘behavioural implication of contraception in male African Elephants’. She was able to pull the sampling techniques that she had learnt in her previous years here, such as performing an ethogram of dominant behaviours, and apply them in a working environment.

This invaluable experience will go a long way to enabling her to spend her career not only working with the world’s largest land animals but helping to protect them. Combining her passion and making a real difference to these animals. Despite their size, elephants are actually pretty nimble and can reach speeds of 40 mph. They can walk up to 121 miles per day, that’s 242,000 human steps. Although, they usually only average 16 miles or 32,000 human steps daily. We challenge you to reach half of the steps of Nelly!