We had an opportunity to share our small-scale study, “Early Years Teacher Status: Constraints, Implications and Reforms required for a 21st Century Early Years Workforce” with a wide audience of academics and students at the 2nd ECSDN research conference in London on 25th January.

Our study was borne through the enthusiasm of Amy an Early Years Teacher Status Staffordshire University graduate who was passionate about the status of Early Years Teachers who train to work with children aged from birth to 5 years old. 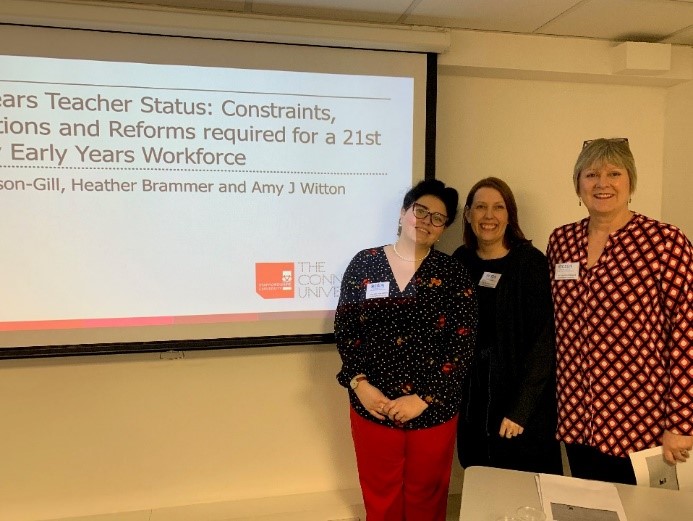 “My passion for Early Years grew from the moment I started the course in 2015 and since then I have completed 3 placements, all of which were very different. It was my final placement that really sparked my passion promoting my qualification as it wasn’t received as well as I had hoped. From being told they didn’t want any students to being told I am an amazing teacher but ‘come back when you have QTS’ and even ‘What even is an Early Years Teacher?’, enough was enough and I wanted change. Before I knew it, I had set up a petition and was receiving crazy amounts of emails and messages from fellow EYT’s and teaching professionals expressing their feelings towards the idea that Early Years Teachers having parity to those who hold QTS. This included a mixture of extremes, including support, confusion and some anger that I would even suggest it, but this fuelled me to continue with my plea for support!

After putting my petition on as many social media sites as possible, this gained interest from a local radio station who were intrigued by my petition and invited me to do a short interview promoting my petition, which was aired! ( https://www.signal1.co.uk/news/local/staffs-uni-graduate-wants-more-recognition-for-early-years-teachers/ ).  It amazed me that so many people assumed that there wasn’t a difference and that all titled ‘teachers’ were in fact teachers. After many discussions with peers and academics at the university, it became very apparent that I wasn’t fighting this battle alone and I had the honour of being asked to join Heather Brammer and Ruth Hudson-Gill in researching into the EYTS qualification. It didn’t take long for Ruth’s office to be redecorated in sheets of research ideas, methodology and dates.

The news of acceptance at the ECSDN conference presented two emotions, pure excitement and also nervousness! After months of researching and advocating change for something I felt so strongly about, this conference meant we were able to share the findings of our research with others within the sector, an absolute dream! This was then followed by the nerves of presenting something so close to me with others and not knowing the response we would get. Once at the conference I was pleasantly surprised by the number of people who wanted to hear our research and even more so once we had presented it. The presentation itself allowed me to finally vocalise my passion and to present findings from our research! The discussion which followed our presentation surprised me with the response from fellow researchers who instead of asking questions, were agreeing with our research and wanted to tell us that they supported the notion of change! From attending this conference, I have gained the confidence to present my research and to stand by my own opinions. I can honestly say that this was the first of many more to come as I am determined to spread the word of our research far and wide and for a shift of attitude and emotion towards the Early Years Teacher Status qualification to follow.” 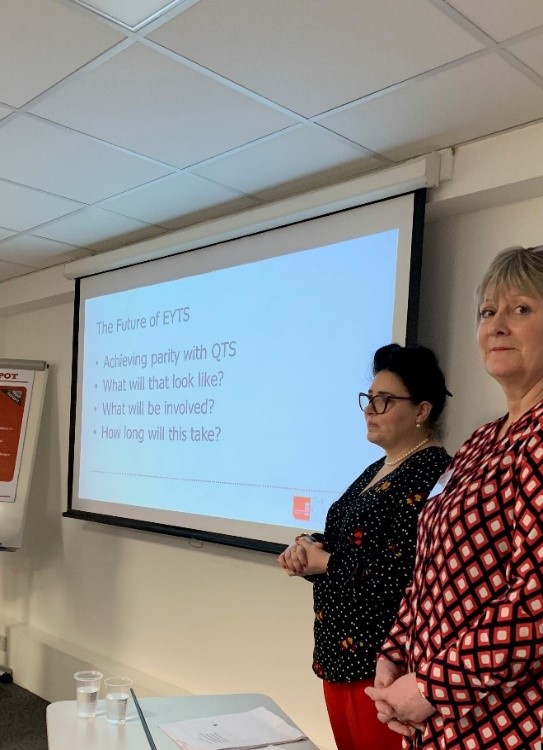 Contact Amy on w015613f@student.staffs.ac.uk for further information on the study.