A student’s perspective of presenting mosquito behaviour and chemical ecology research at The Royal Entomological Society’s ENTO-19 conference at the London School of Hygiene and Tropical Medicine.

Dr Richard Halfpenny and recent graduate and biological sciences intern Steven Lloyd-Jones have been collaborating on this project to present at ENTO-19. Both Richard and Steven have written about their experience during the project, the lead up to and during the conference itself. Although both worked on the project and attended the conference, their blogs provide an interesting insight into how perspectives of the same events can differ based on personal experience. Read below for Steve Lloyd-Jones’ thoughts. 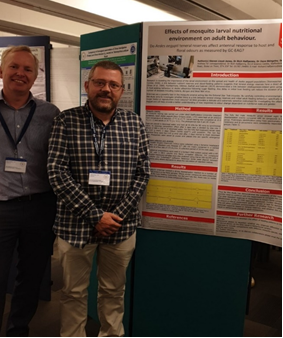 Hi, I’m Steve and I’m a bioscientist – it feels good to put that and not chef (my previous career)! I graduated with a BSc (hons)in Biology from Staffs in 2019. I love life in all its many forms and have been blessed by the staff at Staffs and been able to follow my passions; not that I could have told you what they were before I started this journey.

As my kids approached university age, I dreamt of not being a chef anymore, so I trained as a welder to which I qualified but never felt competent. Then after a family tragedy, I decided to become a nurse and make a difference. During my access course bursaries changed and my biology teacher ignited a fascination I didn’t know was there, so I enrolled in Biomedical science.  After much soul searching in the first year and although I loved Biomed, I knew I wanted to do broader research and be a bioscientist, evolution and behaviour were my real passions, so I changed to biology.

In my, about section a put myself as a bioscientist which still feels like a dream, imposter syndrome and all that.  However, I should probably put Entomologist specialising in how neuronal development affects behaviour. On one hand that feels too highfaluting and on the other feels like not enough to express how well Staffs biosciences have trained me. I’m at a real crossroad in my life but I now have the tools and confidence to make the most of any chances. Unlike most graduates I was given (or earned – depending on your perspective!) an amazing opportunity that meant even before my graduation ceremony I was doing real-life research for Staffs that would be presented at a major conference Ento-19.

Do mosquito teneral reserves affect antennal response to host and floral odours as measured by GC-EAG?

My response was probably the same as yours on reading that title. However, my final year project was on mosquitoes and GC-MS, so I did know about husbandry (don’t ask my wife) and GC gas chromatography but “teneral” and “EAG” scared me. After rushing through the literature, it turns out that teneral (the state after pupation before exoskeleton hardening) in this case relates to larval energy reserves carried through to adulthood. Fortunately, part of my undergraduate final year project was associated with larval feeding. I also found that electroantennography is this amazing method of detecting an insect’s response to stimuli.

Life as a researcher

So, I sat down with Dr Halfpenny expecting an EAG demonstration, a method and a list of instructions. However, what I got was a discussion about how we should do this and what I thought was the best method, how do we go about that etc.  After we decided on a method and timetable, I began the work. Although Richard, (Dr Halfpenny) and the other lecturers were always available their day to day work and holidays meant the research was up to me. The EAG was a pain and I slowly learned there’s a really art to it. In layman’s terms, you pass an electric current along an antenna that is being exposed to different stimuli. In practice, you take something that’s barely visible and fight against your environment to mount it between two tiny homemade glass rods and then it doesn’t work. 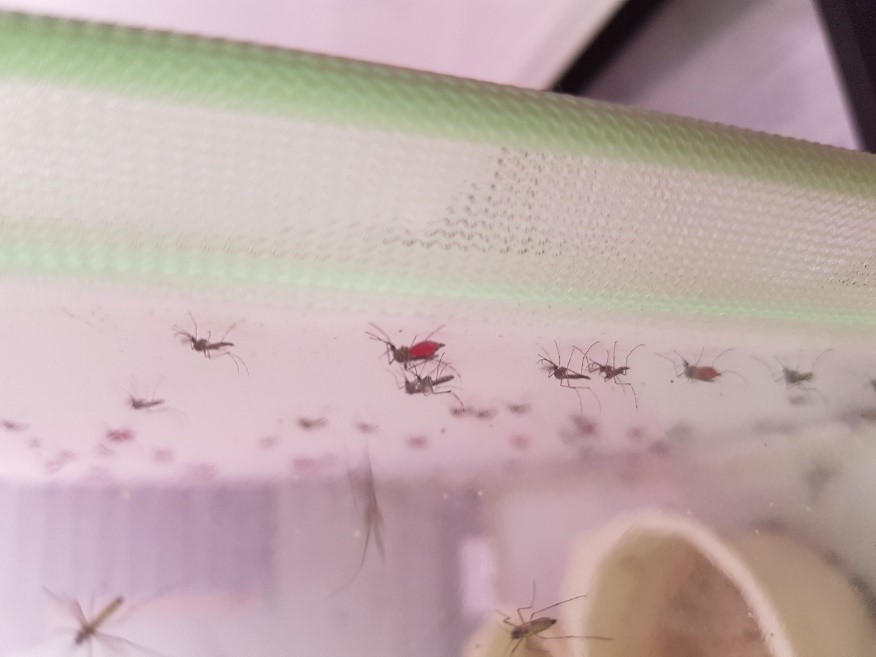 Well after over 100 runs 60 of which “worked” I had some data. Most of which, at first, seemed useless, but enough were really clear.  I felt so proud that Dr Priestman or Halfpenny would be presenting my work at the Royal Entomological Society. That’s what often happens when you research – a lecturer, professor, or lead scientist gives a conference talk and your name is put on the presentation. The only problem was over the weeks of doing the GC-EAG I’d become the expert on the project. So, I was asked if I would like to give the presentation myself. The fact that I was encouraged from the start to take a lead role by Rich and then allowed to present was such an honour and one I didn’t feel capable of doing.

Arriving at the conference was so overwhelming the setting and talks were amazing this was the London School of Hygiene and Tropical Medicine this place has changed the world, and my poster was up and although Richard or Angela would take my place if I didn’t feel ready, I was also giving a 5-minute talk. After not sleeping the night before and after the long first day, of the three-day conference, I knew I’d sleep when I got back to the hotel (although Rich would have gone over my talk and help me rehearse), and I thought sleep was the best cause of action. Well, that didn’t happen, I’d lost my laptop charger and spent the night panicking about how everyone had PhDs and were talking about work they’d been doing for years or that had been submitted for their PhD. I spent the night trying to write notes from memory and listening to podcasts. The plan for the big day was to enjoy breakfast in the park with Rich, and then I’d use his laptop and my notes while the other talks went on. This did not happen as the talks were great, and the time flew and soon this sleepless mess was going to be the one talking, then the moment arrived. I put the PowerPoint of a few slides and a few words up and looked at the scribbled notes and saw gibberish the rantings of a mad man.  So, I introduced my self and started talking. Yes, I talked too fast, and I got to the main bit as the 1-minute left signal was given meaning I wrapped up before I’d finished, and I gave too much time to the discussion of my final year project. However, I think I got a laugh with me, not at me, I also included aspects of the audience talks about their research and how it relates to mine. Ultimately, and thanks to all the biology lecturers at Staffs, I smashed it (their words not mine).  Whatever happens next, I know two things I’m proud to be Staffs and Staffs are proud of me.