As I’ve blogged many times before, readers will be aware that I am known to be slightly sceptical about some of the claims being made for MOOCs, that in themselves they will massively disrupt education. The most enthusiastic propagandists have even suggested that there will be only a tiny number of universities in the future. So having read lots about them, taken and completed a couple I still remained sceptical, which is always difficult when in a room of fervent believers, such as the recent UUK meeting in London.

In a recent essay I submitted (to a MOOC in fact) I argued how the technology used, say in Coursera, could be used to improve on campus student learning, and to enhance the student experience, but that they would not sound the death knell for universities in themselves.

Today (30th May), some great blog articles have appeared talking about the end of MOOCs, based partly on a recent press release from Coursera which states that “The big news is that we have begun working with 10 US state university systems and public schools to explore the possibilities of using MOOC technology and content to improve completion, quality, and access to higher education”

They even call it blended learning. Which we’ve heard of before.

David Kernohan points out that “Both disruptive action man Clayton Christensen and free-course behemoth Coursera have recently swung round to the idea of educational institutions not being broken, merely tired-looking”.

Martin Weller in an blog post entitled “You Can Stop Worrying About MOOCs Now” says:

“It’s hard not to come to the conclusion that MOOCs are rather retreating from their initial promise/threat of world domination here. They’re becoming a means of approaching elearning within traditional education systems. There’s a couple of possible reasons for this.

The first might be that those Venture Capitalists are now demanding a solid and quick return on their investment. The initial open model isn’t offering this any time soon, so a quicker route to pay back is to work with existing providers and students who are already paying.”

So once again, can I offer my usual opinion? Don’t rush into this just because lots of others have done so. Let’s work out what we can learn from MOOCs and other aspects of technology and apply it in a way to improve the prospects of students and the organisation. Not all bandwagons need to be chased. 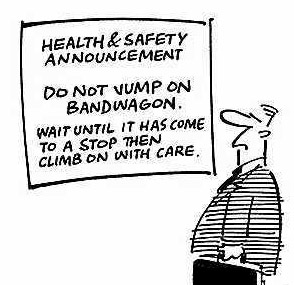