The fifth annual survey of leaders of HEIs in the UK (Charting a winning course – How student experiences will shape the future of higher education) was published today by PA consulting .

The report is summarised as:

“This year’s survey report records the beginnings of a sea-change in the strategic priorities of leaders across the HE system. In place of their historical obsession with the outlook for Government policy and funding, leaders appear to have switched their focus to the competitive battle for fee-paying students and the imperative to offer attractive and rewarding learning experiences. This imperative is driven by the effective demise of grant funding for teaching, coupled with slowing and potentially falling student numbers and increased competition from alternative routes to higher learning.

Sector leaders are unimpressed by predictions that online alternatives will sweep away conventional providers of higher education, expressing confidence in the resilience of the established system to embrace and adapt to new ways of working. Nonetheless, our respondents are united in expecting the emergence of a very different HE system, characterised by a diversity of tailored and student-centred learning experiences delivered through a patchwork of provider partnerships, collaborations and alliances.

Our survey reveals a widespread expectation that not all current providers will survive this disruption, with predictions of institutional failures. There are however few signs of this actually happening. The more likely outcome, in our view, is a radical restructuring of relationships and ventures within and between providers, rather than a widespread shake-out of institutions. “

The greatest worry expressed by HE leaders is around future student demand – not really surprising considering a number of factors such as Changing demographic of UK population, with a reduction of 18yer olds for the next few years and the perceived lack of welcome from the UK towards international students. Over 90% were worried about the decline in UK/EU numbers of postgraduate students, and 80% about international postgraduates. As the report states:

“It is becoming apparent, as the market data increasingly validate these worries, that real competition for students of all types is becoming the major force for change in higher education”

This means that student experience is becoming increasingly important, and an area where universities will seek to differentiate themselves.

“Strategic motivations for this priority were, however, polarised between those leaders who regard improved student experiences as primarily a driver of institutional standing (for example as factors in league table ratings or as a source of market distinctiveness) and those who are more concerned to improve students’ learning outcomes and/or employment prospects.”

This is an interesting split.  There is a real danger in being driven just by league tables, and forgetting that they are simply a mirror held up to us to see a reflection of our performance.  While improving our league table position is important, my view is that our focus has to be on improving student experience and outcomes, and allowing this to drive the league table.

To improve experience, many respondents indicated that increased contact with and access to academic staff would be desirable, whilst recognising the cost implications. In my view, this is where an L&T strategy could be designed which would ensure that contact was relevant, and significantly higher for the earlier levels of an award, with a subsequent decrease in the later years, with better use of technology supported learning for the more experienced learners.

It’s interesting to look at the graph below showing the factors that leaders felt inhibited improvements to student experience – cost implications and government or funding policies figure highly. 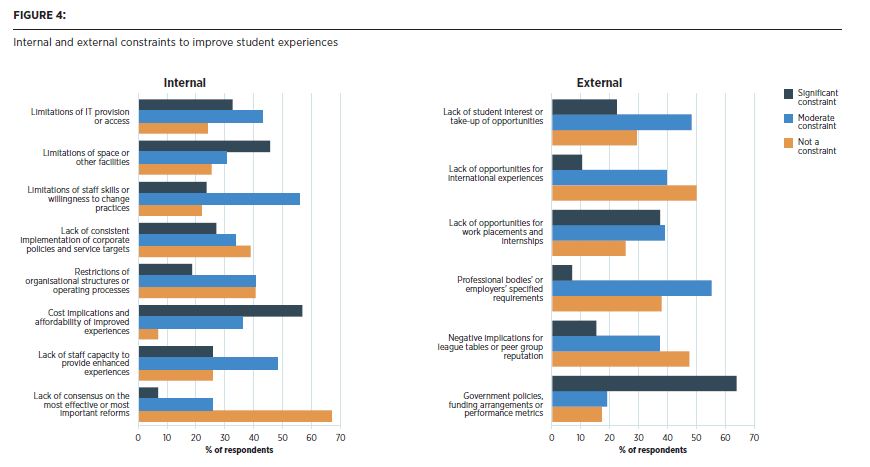 Another interesting finding of the survey was that, after all the hype about MOOCs (previously written about ad nauseam on this blog), many university leaders do not see them as a disruption which could remove established models of higher education. Many did think that the new technologies could lead to new forms of blended learning and blended pathways. Regular readers will know that this would be my take – unless we are all wrong and an avalanche really is coming.

The survey this year has suggested that “HE leaders have little expectation that Government or ‘official’ sector bodies will be central to their future success” and:

“None regarded Government departments or agencies as prime sources of innovative thinking or stimulus for change regarding student experiences (most institutions look first to their own staff and students for new thinking in this area). In this, as in many other regards, it is increasingly apparent that HE leaders no longer see themselves as responsible for delivering public education policies, and are looking to grow their institutions’ futures in a very different, learner-centred market environment.”

Our own university plan reflects this in its focus on partnership with the various key stakeholder groups – of which government is not one.

The outcome of the survey shows the prevailing neo-liberal view of higher education where student outcomes are measured very much in terms of the benefit to the individual student and their individual employment prospects, rather than the benefit that may be gained by society as a whole through their education.

Most HE leaders surveyed though that the sector was going to change in size and shape, with mergers and closures as part of the change. This is similar to previous survey results – which seem to say,” yes there’ll be closures, but it’ll be someone else.” The most anticipated change is in multi-institution partnership, alliances and networks. 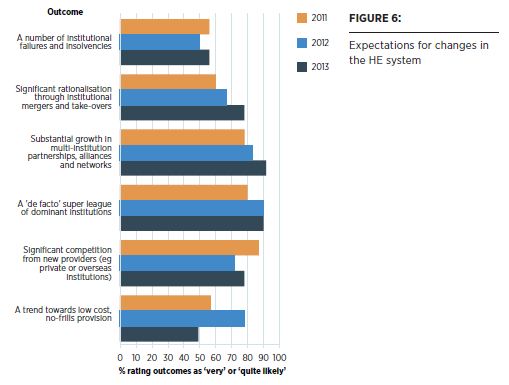 Overall – the two most interesting things in this report for me are: the emphasis on student experience and how that could be differentiate between institutions; and the view of how some technologies will not be the disruption that others believe.