A new publication by HEFCE (28th March 2014) looks at degree outcomes of students who entered HE in 2007-08, and shows correlations between various factors, including the correlation between ethnicity and degree classification.

The key findings of the report are:

The report has been reported widely in the media, in this country and overseas,, with Aaron Kiely of The Guardian writing:

New figures show that white university students receive significantly higher degree grades than those from minority ethnic backgrounds with the same A-level qualifications. This suggests that higher education institutions are somehow failing black students, which should be a national embarrassment.

Three years ago the National Union of Students (NUS) conducted a study on the experiences of black students. The findings showed that they face a range of barriers in all levels of education, which affect satisfaction and attainment. The figures made for uncomfortable reading. It emerged that one in six black students had experienced racism in their institution, a third felt their educational environment left them unable to bring their minority perspective to lectures and tutorials, and 7% openly labelled their learning environment as “racist”.

This reinforces the importance for universities to address this issue. Although the reasons for the attainment gap are complex, failure to respond appropriately could be a reputational risk factor.

The data shows that allowing for A-level achievement, students who declare themselves as white consistently have a higher chance of achieving a good degree. 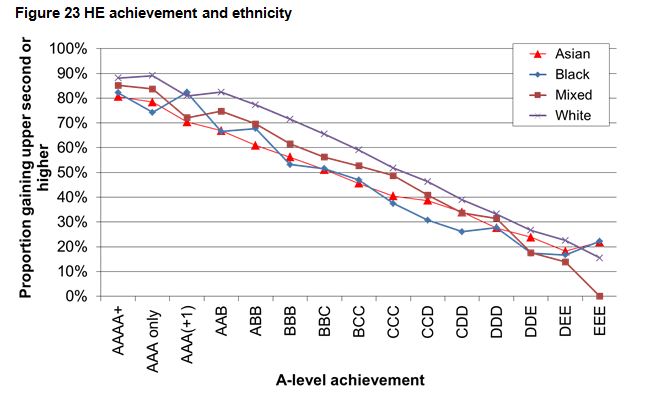 Responding to the report, David Ruebain of the Equality Challenge Unit said:

‘HEFCE’s report underlines something that the HE sector has known for some time – there is a persistent attainment gap for minority ethnic students. ECU and other organisations including the Higher Education Academy have been working with higher education institutions to help understand the complex reasons behind these figures and to identify initiatives that make a difference.

Most recent figures show that the overall ethnicity attainment gap has in fact decreased for two consecutive years, but it is clear that HEIs need to fully acknowledge the issue and commit to improving support so that all students are able to achieve to their potential, whatever their ethnicity

Clearly to really understanding the issue of Black and Minority Ethnic degree achievement, we will need to look at a range of factors, and the underlying theme of the report is that there are benefits in universities using contextual data when offering places to potential students. An alternative reading of this is could be that if universities use data about their students more effectively, then they could develop their learning, teaching and assessment approaches to be responsive to their student intake.

Having a better understanding of where our students come form, their previous study (A-level, BTEC, or access course) could mean that those teaching first year classes could be instrumental in leveling the playing field for all students at the start of their higher education journey.

1 thought on “Differences in Degree Outcomes”