A new publication from HEFCE, ‘Higher education in England 2014: Analysis of latest shifts and trends’, is an overview of recent shifts and longer-term trends, building a picture of publicly-funded higher education in England in 2014 and a sense of how it got to where it is. It also considers possible further changes and continuities in the year ahead.

Available to download are the main report and key facts sheet, together with the data-set used.

This blog post will not consider the sections in the report on research and knowledge exchange, nor on financial health of institutions, but will focus on student enrolments, subjects and growth and decline of parts of the market. I will also ask why we are not following the trends.

The information presented shows a recovery in full time undergraduate numbers in the sector with an 8% increase in 2013-14 compared with 2012-13, however there are significant drops in the numbers of part time entrants and also entrants to undergraduate programmes other than first degrees, with a 38% decline in students on foundation degrees. 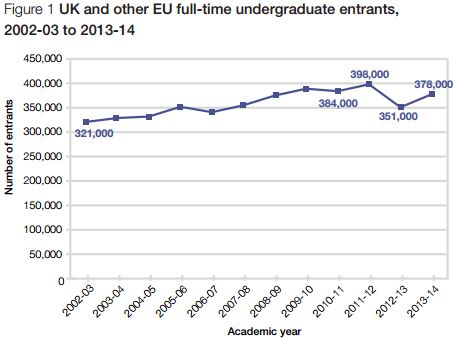 Interestingly, there has been growth in students  registered on full time HE qualifications delivered in FE colleges.

Unsurprisingly, the number of entrants to part time undergraduate awards has fallen significantly, with the biggest decline in awards other than first degrees. 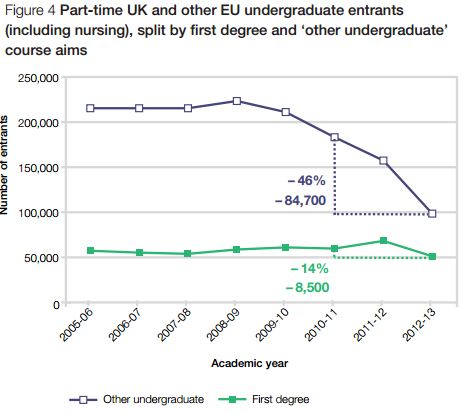 There has been little significant change in UK/EU entrants to postgraduate provision, as seen in the  graph below, but as the report highlights, in 2015, we will have the first potential entry to these awards by students who have gone through their undergraduate programmes under the current fee regime. Since a high percentage of current postgraduate students have no financial support and are funding their own studies, it will be interesting to see how the next generation will view the benefits of postgraduate study. They could be averse to taking on even more debt, or alternatively may be happy to do so, having made an assessment of the benefit of further study balanced against the increased level of indebtedness, much of which may never be paid back. 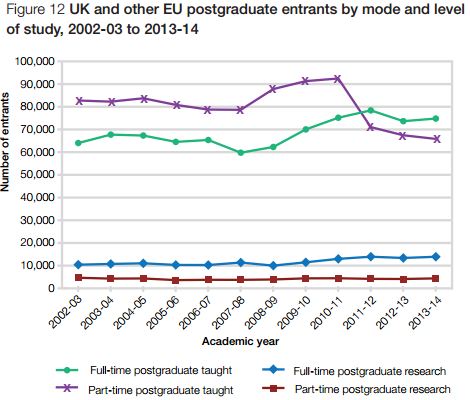 When considering entry to postgraduate provision, this university needs to be very aware of international recruitment – recent visa changes have potentially had a negative effect on how HE in the UK is perceived. To quote the report:

International students have contributed a great deal to the growth of postgraduate education. They make up over a quarter of all postgraduate numbers, but in certain subject areas they are more than half of the cohort, which makes parts of the sector vulnerable to volatility in this market.

A quick look at the growth and decline of international markets is instructive: 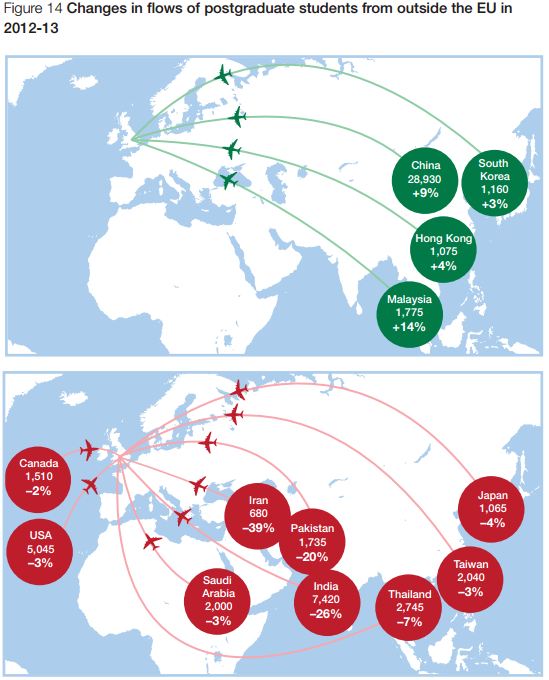 Recent news around visas has potentially had a major effect on recruitment from India and Pakistan, whereas demand from China is booming. 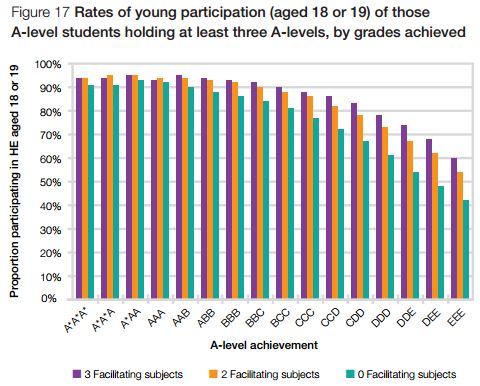 So the message here seems to be – choose “traditional” A-level subjects, particularly if you are a “weaker” student.

HEFCE clearly supports STEM subjects and others of strategic importance such as modern foreign languages. This report makes comments on both of these, and for us the section on STEM is important.

94. In 2013-14, positive trends in STEM applications translated to 98,000 acceptances via UCAS, the highest level recorded. Engineering and technology acceptances bounced back by 6 per cent (2,000) after a decline, returning to 2010-11 peak levels. Acceptances to computer sciences in 2013-14 were higher than at any point since 2003-04, having increased by 12 per cent (2,000) compared with the previous year.

95. UCAS applications data for the 2014 cycle suggest continued growth in engineering and technology subjects, with applications rising by 11 per cent compared with the previous cycle. Computer sciences have seen the biggest increase in applications, of 13 per cent.

As we look to reviewing our portfolio, for me this is a strong message that we need to ensure we are ready to grow in our areas of strength such as computer sciences, and recognise the potential in other science and engineering subjects.

Recruitment by location and tariff

Again, interestingly, this report shows that the West Midlands one of the areas of highest growth (3%) for full time undergraduate entrants to HE, but at the same time saw a significant drop (48%) in part time entrants.

The HEIs which saw significant growth in entrants  tended to be specialist institutions or those whose students have high average tariff scores. Declines of more than 10 per cent took place at 28 HEIs and 17 further education colleges. The majority of the HEIs seeing these levels of decline were those where entrants had low or medium average tariff scores. 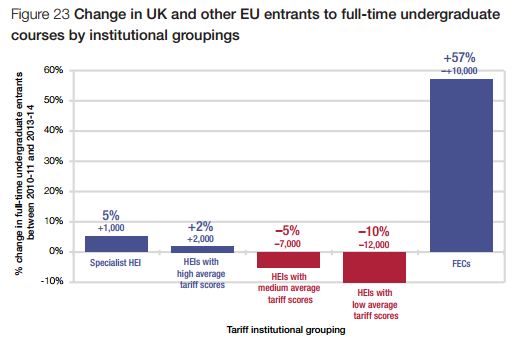 There is a lesson for us here maybe, as raised in the VC’s Blog this week – do we need to do more work to raise our entry tariff, to compete against the HEIs we think of as our natural competitors, and to have a potential benefit to our league table position?

A detailed and comprehensive picture of higher education in England, which provide some useful points for reflection. My key points (and these are entirely personal, not the views of the institution) would be:

3 thoughts on “Shifts and Trends in UK Higher Education”