Reported in this week’s Times Higher is the fact that the VC of Cambridge has spoken out against the parochial attitude of government to international students:

“As the v-c of a global university, I am encountering attitudes and policy decisions which seem ever more parochial and positively detrimental to the work of the higher education sector. More importantly, they are likely to damage British national interests and our global standing.”

While everyone in the sector should welcome these comments, I’m still concerned that the message is not being heard clearly enough by government, and that there is no move as yet to remove international students from net migration figures.

Others have also spoken out against this (but maybe because they’re not the VC of Cambridge, their comments weren’t widely reported). For instance our own VC in his role of Chair of million+ has said at the Conservative party conference:

“The Conservatives should match Labour’s commitment to take international students out of the net migration figures but that’s not all: the compliance regime being applied to universities and education providers by UKVI – the Visa and Immigration agency – is partisan, differential and opaque. A Conservative government should also review this as a matter of urgency.”

And at the Labour conference:

“We welcome Labour’s commitment to take international students out of the net migration figures but this is only part of the solution.

And let me be crystal clear here: the compliance regime being applied to universities and education providers by UKVI – the Visa and Immigration agency – is partisan, differential and opaque. A Labour government would also need to review this as a matter of urgency”

A bit disappointing that these two speeches were under-reported, as we as a sector need to demonstrate that issues such as international student visas affect all institutions.

A quick look at the recent HESA data on student numbers shows the impact that current policy has had – large numbers of students from India in particular have voted with their feet and chosen not to come to the UK to study, while the change in post study work visas has not had such an impact on recruitment from China, where numbers have increased: 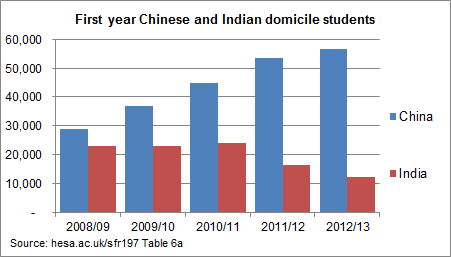 In fact overall the numbers of international students still wanting to study in the uK has hardly changed, with this growth in Chinese students more than offsetting the decline from India.

As well as considering how as a sector we continue to make the argument to government the benefits of international students (both economic and the non-economic impacts on institutions and regions) we should also remind ourselves of the research by Hobsons on what international students are looking for, so that we can align our recruitment policies and practice to satisfy the demand.