Last week, the Equality Challenge Unit published its annual statistical report which considers a range of data sets from HESA, relating to both staff and students. This provides a great insight into the diversity of all the people engaged in the UK higher education sector, but also provides data against which we can benchmark ourselves for activities such as Athena Swan or Race Equality Charter Mark.

A particular interest of mine is student success and attainment, so turning to the statistical reports on students we can see the following:

So there is still considerable work to be done, firstly to really understand the causes of the attainment gap, but much more importantly, to put interventions into place that will help to remove it. Some of the ideas at our Learning Teaching conference in the summer from Dr Winston Morgan of UEL are worth revisiting.

Any university that is trying to reduce the attainment gap has to be mindful of the classification of “BME”. This aggregation is not always helpful, and students from different ethnicity may have a range of different expectations and backgrounds that may affect their engagement and success. More useful is for an individual department in a university to gain a clear understanding of its own student body, their educational backgrounds etc, and then to review past performances on a more granular level, so that all involved in recruitment and teaching have a clearer idea of what the student population actually comprises.

In addition, the gap in attainment between students with or without a disability is much smaller than for the attainment gap seen for BME students: 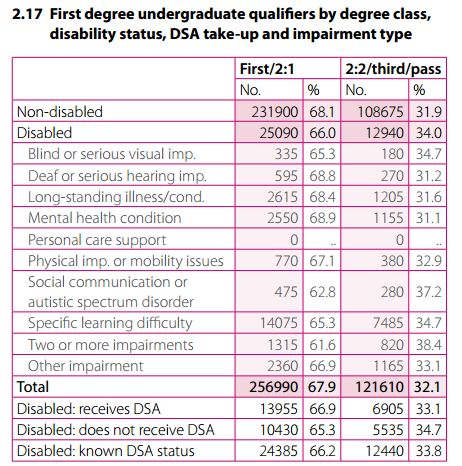 These two sets of data reflect what we have seen previously at Staffordshire University – a small (and sometimes insignificant) attainment gap for students with disability,but a significant attainment gap between white and BME students.

All in all, the statistics from ECU provide some really useful background information for universities as they progress their equality and diversity agenda.