UCAS have now released their analysis of the 2014 entry and acceptance cycle. A detailed report is available at the UCAS website.

The key points that come out are:

Although the picture overall seems one of good news, within the overall statistics are some significant variances.

When looking at the “winners and losers” in terms of acceptances, then there is quite an amount of movement in the market. Providers other than universities have seen some hinge rises in acceptances and equally other non-university providers have seen huge falls. Within the more traditional university sector there are also gains and losses – the chart below shows the percentage change in acceptances from 2013-14 to 2014-15. It is difficult to discern a clear trend here, but factors that have already had an effect was the impact of unlimited recruitment to ABB+ applicants – some high tariff universities have chosen to grow their undergraduate numbers. The forthcoming year will be more interesting again – removal of any student number controls will mean a variety of different behaviours. Some universities may choose to grow no further, and to maintain their position of enrolling high tariff students who will benefit them in league tables. Further down the pecking order though, competition may become tougher as middle ranking universities seek to grow through student numbers. 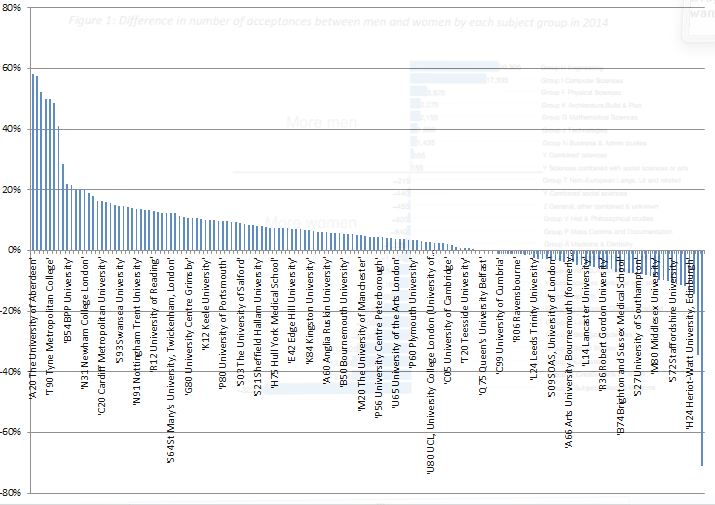 The first of these indicates the rise in applicants and students accepted onto places who hold Btec qualifications.The second shows the gender difference between subject disciplines.

Firstly on entry qualification – if on a given course or module, there is an increased number, or indeed majority, of students holding Btec qualifications, are we ensuring that our learning and teaching strategies, and in particular types of assessment, are designed to ensure that these students can succeed. The educational experiences of a Btec entrant will be different from those of an A-level entrant, and so the question must be asked – have our courses been designed with their experiences in mind? In addition, is the institution able to provide detail (ideally at module level) to teaching staff in advance of beginning of teaching, on the typical previous educational experience and success of new entrants There is a possible role in the future for using data analytics for predictive purposes, but in the first instance, some simple information about the cohort would suffice.

Secondly, on gender difference, it appears that there is still a polarisation between certain subjects and despite the need for more engineers in the county, and all the work though Athena Swan and other initiatives, that certain disciplines are still male dominated. Equally Education appears to be female dominated, which again has long terms implications for the diversity of teaching in our schools. 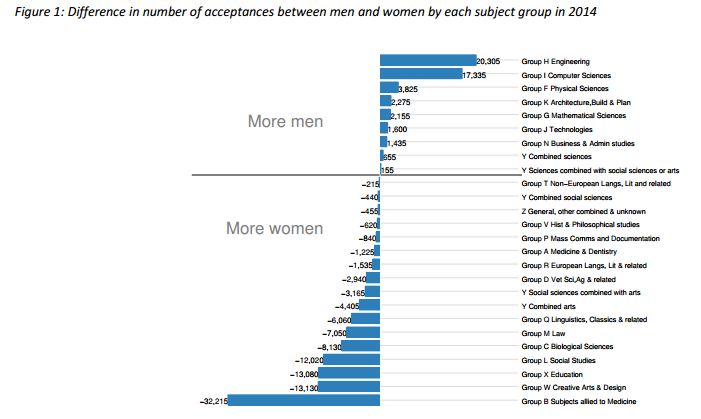