As if analysing and reporting on the main UK league tables (Complete University Guide, Guardian Guide and Times/Sunday Times Good University Guide) wasn’t enough, then there are plenty of other to keep policy wonks busy in the winter months.

First out this month is the People and Planet University League. This is most notable this year for two things: firstly the methodology and level of detail have changed from last year, and secondly, the refusal of a large numbers of universities to take part.

As reported in the Guardian

A number of universities seem to have become frustrated over time with the “green league”, which has also this year been renamed to remove the word “green” from the title. Concerns centred on the time involved in collating the information required, some criticisms of aspects of People & Planet’s methodology, and perceived goal-post changing.

Our own position appears to have fallen this year, no doubt in part to the changes in methodology and the kinds of data requested. The diagram below shows the relative rankings of million+ universities 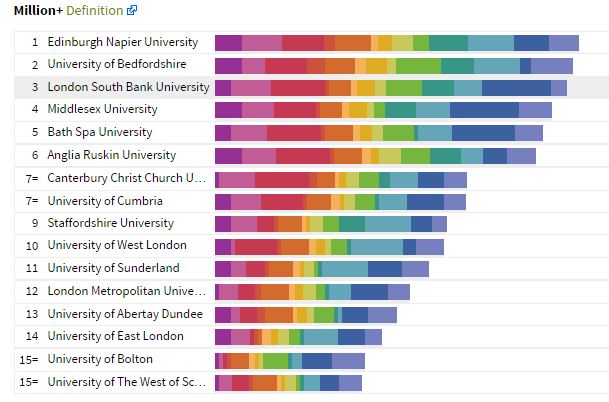 The second ranking that is about to come out will be launched in February. Spiked Online, a website that promotes free speech, and also supports a campaign against the “no platform” policies of Students’ Unions, is launching the Free Speech University Rankings.

Before the Charlie Hebdo tragedy, #JeSuisCharlie and the inevitable post-Hebdo backslide into the illiberal status quo, free speech was already a flashpoint issue in UK universities. A combination of a creeping, risk-averse bureaucracy at the heart of university administrations and an openly censorious culture in students’ unions devastated freedom on campus. It undermined the traditional role of the academy as a space in which students and academics could think the unthinkable and say the unsayable…….In February, spiked is launching the Free Speech University Rankings (FSUR), the UK’s first ranking of universities according to their commitment to freedom of speech. Researched and developed in partnership with students across Britain, it’s a nationwide study that will provide students and academics with the weight of evidence they so badly need to take their censorious institutions to task

In light of the discussions taking pace across universities on the approach we should take to free speech on campus, then this looks like an interesting addition to the debate. At a time when individual staff feel that certain topics may be considered “unsafe” to discuss, and when the proposed new powers in the Counter-Terrorism and Security Bill put a duty on specified public authorities, including universities, to “have due regard, in the exercise of its functions, to the need to prevent people from being drawn into terrorism”, then a robust understanding of freedom of speech and expression becomes central to the role of a university.