Formerly the minister responsible for universities, David Willetts is now a visiting professor at King’s College, London and last week released a short report on “Issues and ideas on Higher education:Who benefits? Who pays?”.

From the King’s website, the report makes five key recommendations: More cash for students by increasing total maintenance support, whilst saving public spending with a shift from maintenance grants to loans

A pleasing part of the report is the first section on the benefits of HE. At a time when we are always being asked to regard higher education as a private economic benefit, both from outside the academy, and within the institution with a reductive focus and simplistic view of employability above all else, David Willetts clealry articulates that the benefits of HE are both to the individual and society, and are both economic and non-economic. In this he references work from his previous government department of Business Innovation and Skills. 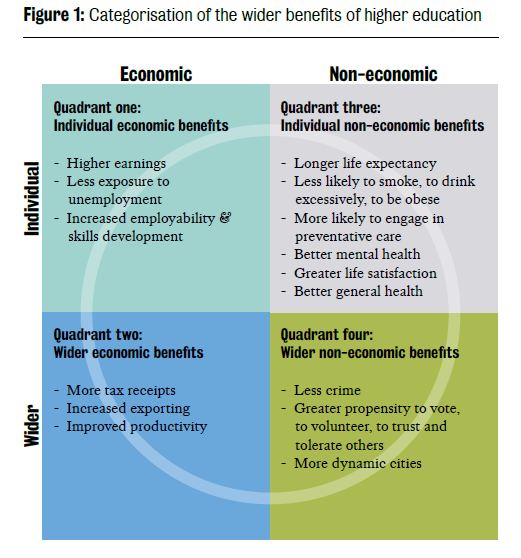 In looking at paying for higher education in England, Willetts reminds us that the current system of loans is not one of commercial loans, and might have been described as a graduate contribution scheme. However the rationale for sticking with slightly misleading terms was:

We did look at this in government but the language of fees and loans had already taken hold. It was how the structure we inherited was described. If we had tried to change it, we would have been in danger of having one official name for it and a separate colloquial description. I did not wish to go back to the days of the poll tax, which ministers were supposed to call the community charge: there was a ragged cheer every time a minister forgot and lapsed into talking about poll tax.

(We wouldn’t have wanted that embarrassment to happen….)

Willetts states that our system of  funding is differentiated from a commercial scheme  through income contingent repayment and universal access for full time students.

In addition to loans or tuition fees, the current system allow for loans for maintenance, and then there are three further items of expenditure.

The forth and final category of spending is the Resource Accounting and Budget charge, which probably only David Willetts and Andrew McGettigan fully understand. I suspect they don’t agree with each other though.

The RAB is a measure of the amount of debt that the government will eventually write off based on non-repayment. Willetts explains how it differs from other debt as follows:

However, the government does have to borrow money
now to make the loans to students. This is not regarded as
adding to net borrowing as it is matched by an obligation
to repay the loan – but it does add to net government debt
because the asset which the government acquires, the loan,
is not regarded as sufficiently liquid to count as a financial
asset according to rigorous financial rules. That is why
selling student loans reduces net government debt. If this
leaves you hungry for more detail, the July 2014 Office for
Budget Responsibility (OBR) Fiscal Sustainability Report
has a fuller discussion.

The RAB charge s described as being very sensitive to lower growth in earnings, and this is one of the reasons for the rise from 28% to 46%. Willetts argues that the modelling of RAB is more accurate than the system used in other countries, and that to identify a suitable rate for a graduate tax (an alternative HE funding system) would be as difficult, and would also have provided a delay before money started flowing in.

In terms of what to do now, Willetts looks at various other proposals, while remaining with the current system:

What we need is a framework to explicitly adjust the parameters to keep it flexible and sustainable, whilst keeping the basic structure. Such a framework should also avoid endless ad hoc adjustments. Therefore, I suggest that at the start of each parliament the government should assess the latest evidence on the costs and benefits of education, and set the key figures for the graduate contribution scheme. This could be done within government or by an outside panel of experts and interested parties – or some combination. It is emphatically not a review of the whole system. It is not a Robbins or a Dearing or a Browne. Its purpose is not to change the structure of higher education funding. All three political parties, when in office, have recognised its strengths, and structural changes can distract us from uncomfortable tradeoffs. Instead, the aim is to calibrate the structure in the light of new evidence and any change in  political views on the right balance to strike.

The rationale for a 5 year review (linked to parliamentary terms) is given as:

All in all, a typically well argued defence of the current system for funding HE, together with a clear articulation of the wider benefits of a university education. Howver the emphasis throughout the paper on the need for graduates to pay for their education and not to cross subsidise others (as would be the case with a graduate tax) does maintain the focus on the private rather than societal benefit.

Worryingly though, the government still has to make significant savings from the budget for BIS this year of £450m, and so the existing expenditure on maintenance grants and on support for disadvantaged students starts to look vulnerable. While Willetts shows that not all higher education costs have been privatised, he suggests that “authoritative estimates of the scale of this public support would help tackle this misconception”.

Is it too late to make this plea – we understand the wider benefits of HE, we know that not all funding is yet privatised and the importance of this source of funding, but do we have the right  narrative to explain this, and the right speakers to say it?