This year’s Statistical Report from the Equality Challenge Unit has just been published, and provides a wealth of detail on students and staff in the academic year 2013-14.

A main pat of my work has been looking at student attainment, and others in the University are working on addressing the attainment gap between white students, and those from BAME backgrounds.

“the ethnicity degree attainment gap in the UK was 15.2 percentage points. 75.6% of white qualifiers received a first/2:1 compared with 60.4% of BME qualifiers”.

However, BME students cannot be considered as one continuous group, and variations exist between those of different ethnicities, as the graph below shows: 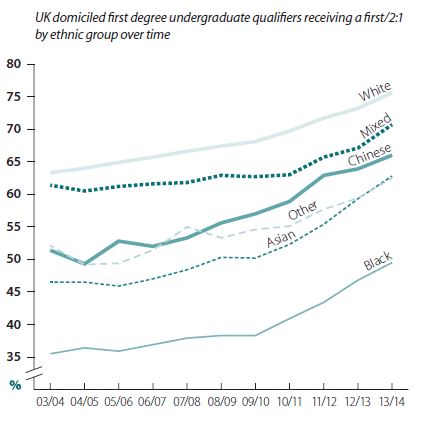 The attainment gap exists for all groups, but has closed the most for Asian students. We can now benchmark our own degree outcomes for 2013-14 against this data, and also our 2014-15 outcomes to see how we are progressing compared with the sector overall.

The report also looks at the impact of subject on attainment and ethnicity and states: “In every subject, a higher proportion of white qualifiers received a first/2:1 than BME qualifiers.”

Considering students with a disability, then the attainment gap is nowhere near as pronounced as it with with students from a BME background. 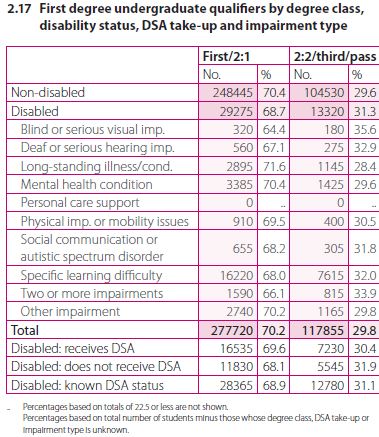 Finally the report considers the impact of  gender, and shows that female students were more likely than male students to gain a 1st or 2(i) and this was the case in all subject areas except social studies.

The report goes on to look at the intersections between the main groupings of data. One factor that is not considered is Widening Participation status. Although this is not a factor that is considered from an equality perspective, it is one that is raised as a possible factor whenever we talk about the attainment gap for BME students.

Ideally we need to be able to build models that allow us to visualise the outcomes of students, and to easily filter based on multiple characteristics. I’ve been doign abit of work on this very thing this week, and using some old data have built  Excel models that allow a visualisation of degree outcomes for combinations of ethnicity, WP status, disability and subject. It’s a great way of getting an insight into how different groups perform in different subject areas. 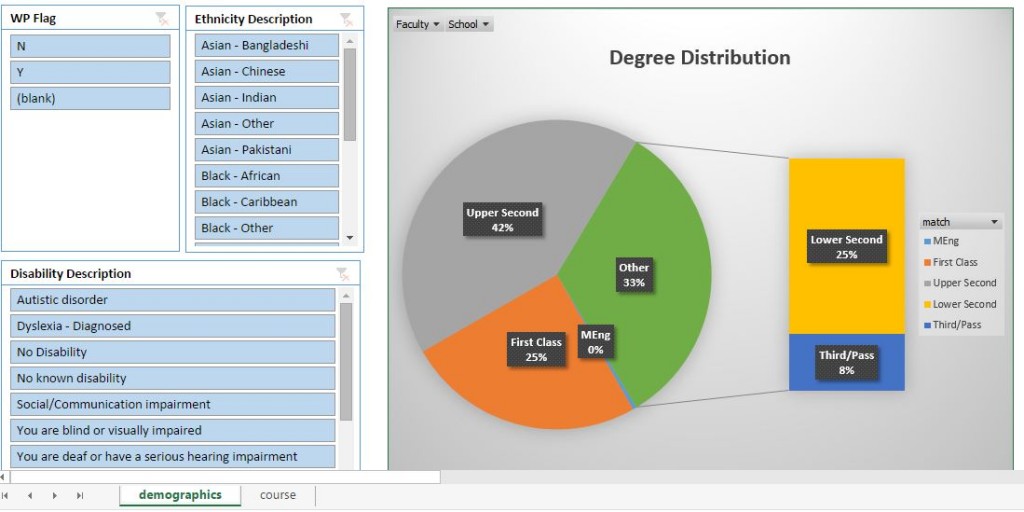 Overall however, as a sector we still have a huge challenge to face in tackling the BME attainment gap. I’ve been writing about it for a number of years on this blog. I really look forward to the day I don’t need to write about this subject.