An annual report from Universities UK looks at trends in the UK HE sector based primarily on statistics from HESA, and looking over a 10 year period.

This is a period that has seen significant change, and when we look at the proposals in the recent Green Paper, there is little to suggest that the pace of change will be slowing.

A quick review of the report then gives us some business insight in to the sector generically, from which we can extrapolate for our own institution.

The three chapters consider: students, staff and finances. This blog piece will focus on students

Under students we can see the changes in make-up of the student population – full time numbers, both postgraduate and undergraduate, show an increase, while part time study clearly has declined. 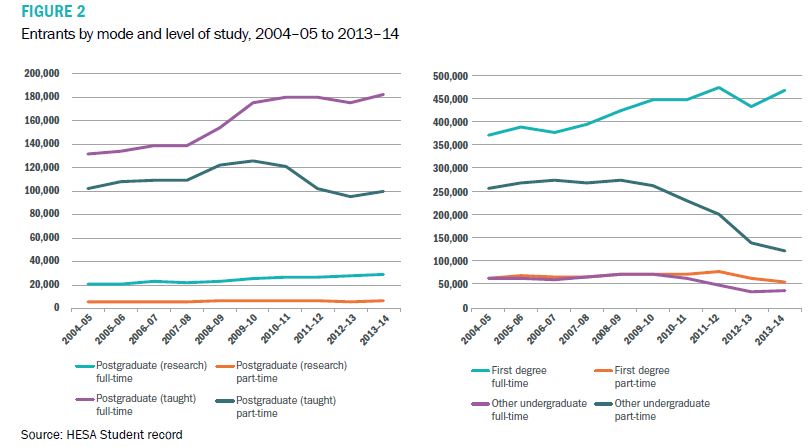 The contiued and drastic decline in PTUG is explained by

the removal in 2008–09 of funding for students taking qualifications equivalent to or lower than ones which they already had, and by reforms to undergraduate funding in 2012–13, including an increase in fees following cuts to teaching grants and issues around eligibility for tuition fee loans. At the same time the economic downturn has also caused a reduction in the number of students able to self-fund part-time study, and a reduction in the number of employers willing to support employees through part-time study.

The suggestion in eh recent Green Paper on removing ELQ restrictions for thise wishing to study STEM subejcts may help slightly in this area, but the contiued decline in part time numebrs alsoe reduces the chances of universties being able to tackle issues of social mobility, again a key part of the Green Paper. 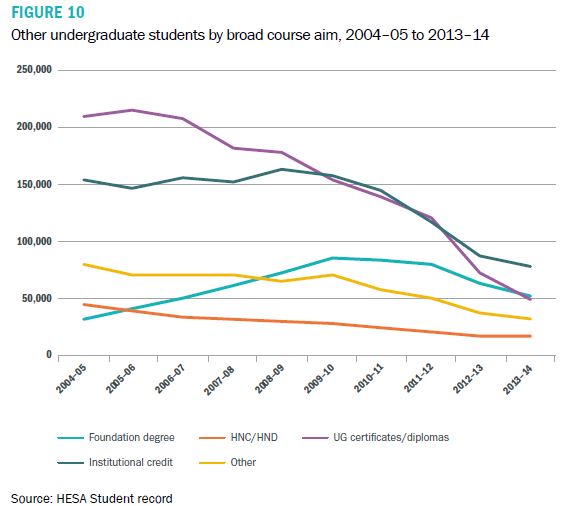 Which would seem to have some pretty strong messages abut the worth of developing a number of courses! 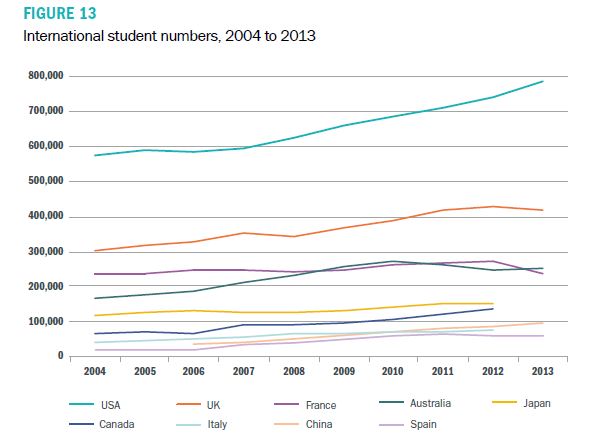 We may be seeing the impact of the UK view of students being part of the net migration target and the removal of PSW visas. As UUK highlight:

the decline in students from India are fuelling concern about the UK’s ability to attract international students, which could damage the higher education sector.
International student fee income accounted for 13% of sector income in 2013–14, and demand from international students can support the provision of certain strategically important subjects in the UK (eg engineering, technology and computer science, particularly at postgraduate level where around half of all students are from outside the EU). Higher education is important to the wider UK economy, with non-EU students contributing £7.2 billion to the UK economy and supporting around 137,000 jobs through their tuition fees, accommodation and off-campus expenditure in 2011–12.

Looking at subject of study over the 10 year period shows some clear trends, much of which is backed up by our own detailed analysis of UCAS data. 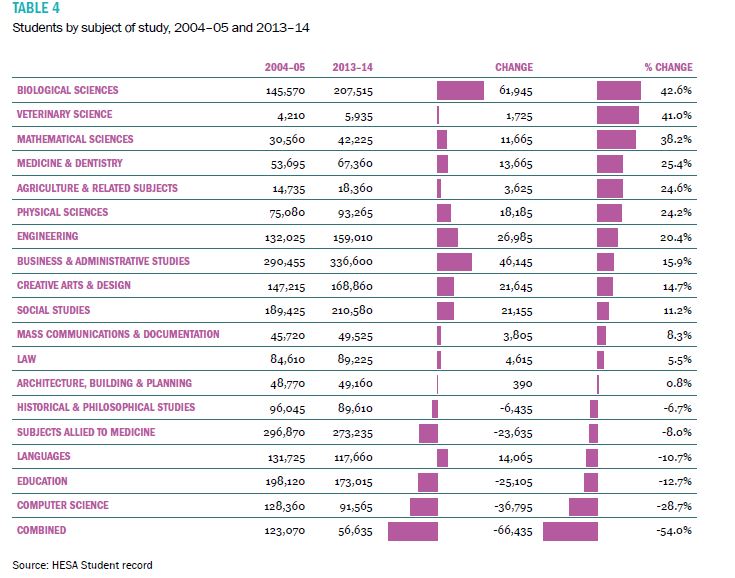 The most surprising part of this is perhaps the overall drop in computer science, at the same time as students with god computer science skills are desperately needed by employers. The huge drop in subjects described as “combined” should not come as a shock – maybe students are looking for courses that they believe gofer a clear route to employability? Interesting, Keele, our nearest geographical competitor, is now developing courses in Liberal Arts and Natural Sciences, which initially might seem to fly in the face of this trend.

The report notes the number of people in the workforce who now have tertiary level skills, but recognises that the UK lags behind other countries in this regard. Also, looking to the future, a clear need is identified for an increased number of people with undergraduate and postgraduate skills for the needs of the international workforce of the future. 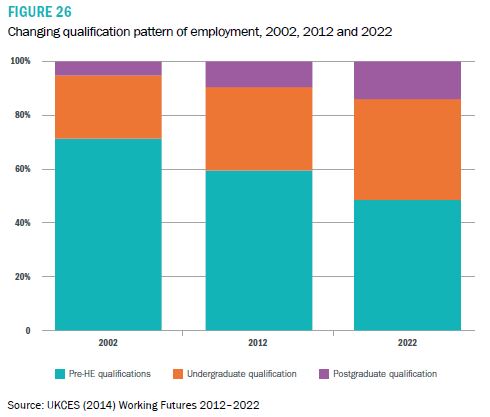 The paper ends by summarising changes in student numbers, income and staffing: 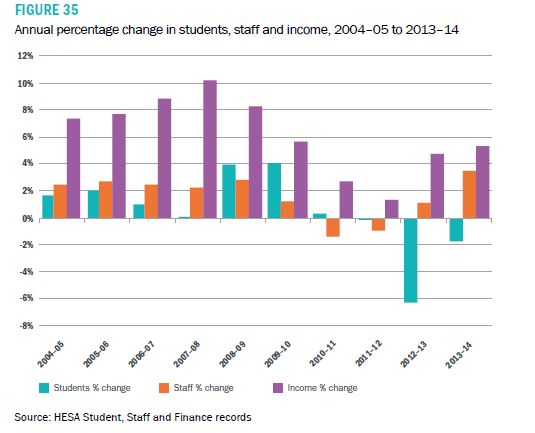 Despite the challenges of a dynamic and sometimes uncertain operating environment, the UK higher education sector can point to a number of successes over the period……In this increasingly competitive international environment and with a referendum on remaining in the EU taking place before the end of 2017, the UK higher education sector will continue to work hard to maintain its position and attract the staff, students, funding and partnerships that are central to its success.