A few months ago I wrote a piece here on  my views of how the changes announced in the Autumn Statement might affect universities like ours, specifically the impact of removing the cap on student numbers.

Since then, this has been written about and discussed in detail. Until we get throug hteh next two years of UCAS entry then we can’t draw conclusions completely. In the last week or so, two new articles have appeared on this very subject.

One thing to bear in mind is that the next General Election is not that far away, and over on the wonkhe website, Debbie McVitty suggests:

She proposes 4 scenarios, based on ranges of supply and demand for HE places, and concludes that:

A more robust approach would be to consider what interventions will best secure a sustainable pipeline of qualified and informed applicants to higher education (significantly enhanced IAG springs to mind) and how policymakers can identify and share the risks of innovation with higher education providers in order to ensure a meaningful social benefit to increased participation.

Recently the pages of THE have been filled with more cheerleaders urging the government to go further and faster. My advice to these credulous souls is that they should be careful what they wish for.

He worries that the market in HE that the coalition government has sought to create does not exist – indeed capping numbers, setting a limit on fees and tinkering with core and margin numbers has had little effect in creating a free market.

At first, the coalition government introduced a pseudo-market, involving competition around “highly qualified students”, but that has had a dysfunctional and erratic impact. The complete relaxation of student number controls appears to be a final and desperate attempt to create a market in higher education where there has been none so far.

It is an experiment that is unlikely to succeed. The additional student numbers will have to be paid for. Given that the sale of the student loan book is unlikely to cover the cost, either the funds will be found by the government itself, which is improbable, or students will pay even more, which is possible. Otherwise the additional students will have to be accommodated without a commensurate increase in funding and with negative consequences for quality and standards.

This last point is worth noting – as costs in universities rise, and while the top end of fees is capped then gradually the money available to support teaching and learning will reduce.

For the financially secure institutions which easily recruit their self-identified quota of undergraduate numbers, removing the student number ca may not be a problem: they will have no new entrants into the “market” to compete against, and will  be able to campaign to remove the cap on fees and tackle that contradiction in market philosophy.

Removing the cap on recruitment creates a challenge for those universities who might struggle to recruit in future One outcome might be a further increase in private provision, particularly for low delivery costs subjects, or more delivery of HE through FE and commercial partners. Both of these will create a challenge for some universities. These lower ranked institutions, or those who find to harder to recruit undergraduate numbers, will find themselves more exposed to a market environment, with aggressive competitors who will be prepared to differentiate on price.

In terms of what my university can do to address this challenge, well I’ll return to that in my “we can be better than this” series of blog posts.

The recent HEPI/Which? Report on student academic experience was reported on in these pages previously. Having downloaded the raw data, I’ve been having a look at a few of the factors, and compared Staffordshire University’s performance with a number of comparator institutions, and a couple of local Russell Group universities.

Firstly – average contact hours and amount of private study. Despite the worries often expressed about differences expressed in KIS on the Unistats website, there is very little variation in the number of contact hours averaged across all subject areas for all the universities under consideration. Adding in private study hours, students at Sunderland, Liverpool John Moores and Glyndwr appear to be doing the least amount of academic work. 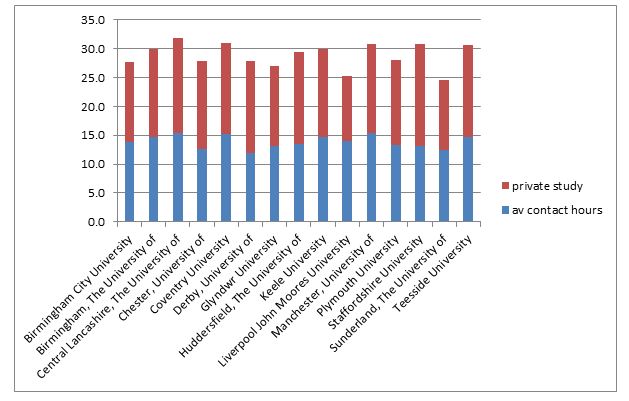 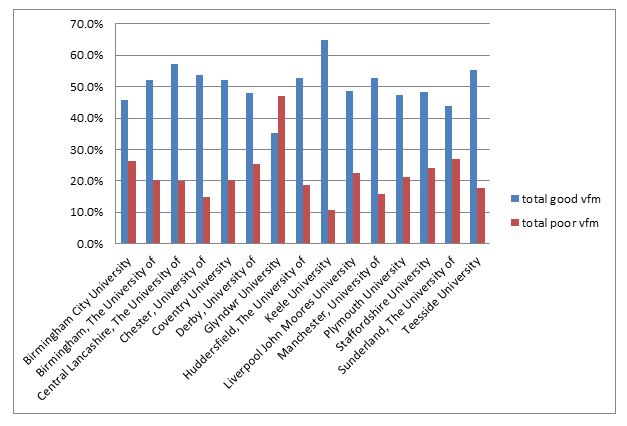 Looking at the number of students who agree that “I am satisfied with the amount of time-tabled sessions I have had this year then again those with the lowest satisfaction with this are the two are perceived to be the worst value, even when the timetabled hours are not significantly different. 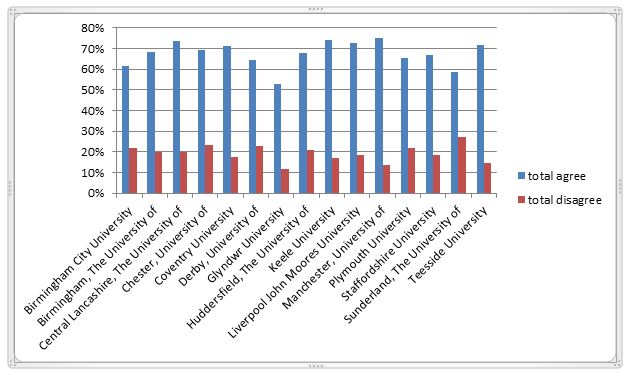 So what about whether students would have chosen a different course? (it’s worth just noting how many left this question blank) 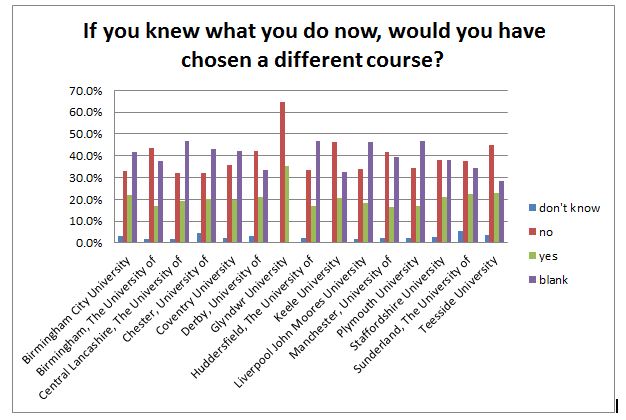 It’s difficult to draw sensible conclusions from the plethora of information provided – although that hasn’t stopped the press publishing lots of articles about the poor value of higher education. One thing does stand out for me though – the gap in perception about value for money and contact hours, students at institutions with the lowest perception of value for money are experiencing the same contact hours, but are putting in less private study.

A comment on the report when first published was around the QAA expectation of 10 hours of work per credit, and this is a subject I’ll return to in a later article and suggest some things we might do to bridge this gap and improve student attainment.