A new publication from Pearson and written by The Economist Intelligence Unit is reported in the Times Higher.

Although it is not just about higher education, there are some useful points to draw out from it as ther report “seeks to distil some of the major lessons on the links between education and skill development, retention and use”.

Skills for the success in the 21st Century are identified, as shown in the diagram below. 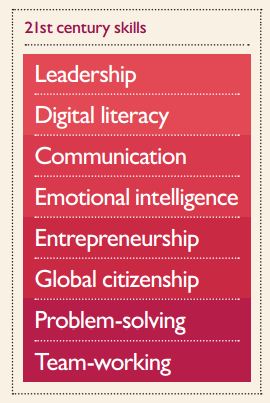 From a higher education perspective, it is worthwhile questioning if we are developing and delivering programmes of study that enable our students to develop these skills to an enhanced level. Most universities these days have statements on graduate skills and attributes – how closely do these match?

A key point from the report however, is that people need to keep practising and developing these skills: lack of use leads to atrophy.

From the Times Higher article:

“Sir Michael Barber, Pearson’s chief education adviser, told Times Higher Education that in the 21st century “it’s clear that however great your first degree is, you’re going to have to keep learning”.

Because there is so little certainty about what the jobs of the future will involve, universities must train graduates with the right “attitudes and attributes” to keep learning for life, he said, noting that this was something the “best” higher education already did.

Universities should focus on this when trying to improve employability, he added, rather than on “preparation for a specific job”.”

An interesting item in the list of essential skills is “digital literacy”. This is an area that we will be doing more work on the next year at Staffordshire University, and not just with our studentts, but staff as well. Linking this to the idea of learning for life (above), then many  mightsee online education and MOOCs as a way of supporting that continuous learning and redevelopment. Interestingly the report states:

“One question is whether technology, which is becoming increasingly entrenched in the modern learning environment, can be used to encourage low-skilled adults to pursue further education. In the last couple of years many of the world’s top universities have launched massive open online courses (MOOCs), broadening access to high-quality educational resources. But a recent study by the University of Pennsylvania found that 83% of its MOOC participants already had a post-secondary degree – far higher than international averages. Broadening access through technology, then, appears to be not enough. A culture of learning and understanding the value of bettering oneself needs to be fostered at an earlier stage in life before new technologies can start to have a real impact on lifelong learning.”

Fascinating, when Pearson’s report last year on “An Avalanche is Coming” suggested that MOOCs were about to sweep away traditional university education!