In addition to expertise in the more traditional research methods, we have a number of staff who apply innovative approaches to data collection and analysis. A selection of their work is highlighted below:

Dr Nikki Street explores visual aesthetic relationships to fractals and natural patterns across cultures and sub-groups. She is interested in how environmental factors (such as nature, art, beauty and/or individual experience) can influence behaviour and psychological wellbeing.

Nikki is currently collaborating with Mark Ware (an award-winning multimedia artist and a Honorary Research Fellow at Brighton and Sussex Medical School) to explore whether beauty can be classified clearly or whether it lies ‘in the eye of the beholder’ as a product of the individual experience.

Nikki, Gemma and Mark collaborated on a project to produce a series of digital artworks collectively entitled, reflecting nature, that was exhibited throughout 2016/2017 at eight venues throughout England. This collaboration is focusing particularly on two features that are understood to contribute to visual preferences; symmetry and natural patterns. Both have been attributed to inducing positive psychological states including mood, concentration and stress-reduction responses, sometimes termed the biophilia effect.  With a series of experiments Nikki and Mark aim to understand and harness this power, attempting to amplify it with research-informed artistic production with a view to result in artistic output that evokes positive psychological states.

A number of projects are running investigating how education might influence children’s drawing ability and drawing experiences.

Richard is currently heading up a cross cultural project collaborating with artists that investigates the development of expressive drawing ability in the UK and China.

This area of work is led by Prof. Karen Rodham. 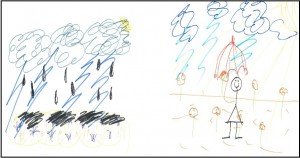 There is evidence that pain drawings may be a method by which people in pain can meaningfully communicate, understand and potentially alter their pain experiences.

Professor Karen Rodham is currently conducting a study following a protocol established and tested by Loduca and colleagues (2014) in Brazil, which incorporates pain portraits into the rehabilitation process when experiencing chronic pain.

Understanding more about a person’s experience of pain will facilitate the development of more individualised and patient-centred treatment plans.

Research led by Dr Sarah Rose. Although there have been anecdotal claims about the impact of watching television on young children’s imagination and creativity there has been very little scientific research into this area. Dr Sarah Rose and our Children’s Lab are conducting further investigations in this area

A recent project aimed to better understand whether viewing television increased or decreased creativity and “divergent thinking” in young children. Three-year-old children were given some novel toys to play with. The way that they played with these toys was assessed for indicators of creativity. Some of these children then watched an episode of a popular children’s television series while others looked at books and completed jigsaws.  After this they all took part in a range of fun activities designed to test their creativity and imagination. By assessing creativity before and after the children watch television,  the short term effects of television watching on creativity were assessed.

Research led by Dr Alison Owen has investigated the effects of appearance-focus on promoting healthy behaviours. This work has included the use of facial-ageing software as an intervention tool to promote healthier behaviours, such as reducing the use of tobacco and alcohol as well as promoting the use of sun protection lotions. 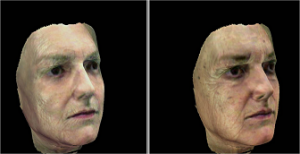 Alison’s work using the facial-ageing software has been featured on BBC Television – you can watch a clip from the programme featuring Alison below (from 1 minute into the video):