Eddie ‘The Beast’ Hall recently visited the Sport and Exercise Science Laboratories at Staffordshire University as part of a BBC 1 documentary that is to be aired in March 2016. Eddie, who hails from Stoke-on-Trent, has recently retained his title as Britain’s Strongest Man for the third consecutive year, finished 4th in the 2015 World’s   Strongest Man, and is currently the world record holder for the deadlift (lifting a staggering 463 kg to break the record!) 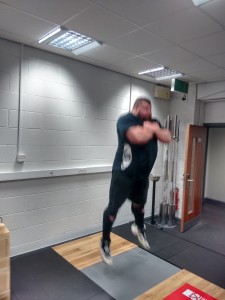 Sport and Exercise Science staff and students put Eddie through a series of physiological tests to ascertain what it takes to be one of the world’s strongest men. Eddie undertook tests to measure his resting metabolic rate, body composition, anaerobic capacity, muscular power, and muscular strength. Eddie’s results were astounding and nothing like those typically seen when students perform these tests as part of their Sport and Exercise Science degree here at Staffordshire University.

With a body mass of 174 kg, Eddie’s sheer size would not allow him to fit inside the Bod Pod for the assessment of body composition. Instead, Sport and Exercise Physiology Lecturer, Dr Jacky Forsyth was left with the arduous task of trying to measure Eddie’s body composition with a set of skinfold calipers.
Resting metabolic rate, which provides an estimate of how much energy Eddie’s body needs to sustain its basic functions to stay alive, was nearly double what is typically seen in a recreationally active male and female.
Eddie’s muscular strength and power were extremely high and easily surpassed what staff and students had seen during any previous sports science testing with athletes. What is even more astonishing is that these incredible results were achieved less th 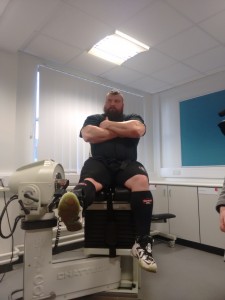 an 3 days after Eddie’s victory at the British Strongest Man Championships. As Dr Dean Burt explains, “it can take up to 4 – 6 weeks to fully recover from a bout of strenuous exercise. Given the incredible amount of physical strain Eddie would have put his muscles through to win Britain’s Strongest Man, he would have arrived for testing in a heavily muscle damaged state whereby maximal strength and power might have been reduced by as much as 30 – 40%. It is not difficult to assume that the exceptional strength and power results Eddie achieved today are only a fraction of what he can actually produce”.

The gruelling afternoon of testing finished with a full-body massage from one of current undergraduate Sports Therapy students, and in fact, Eddie’s current sports therapist is Thomas Hatrick, a 2015 graduate of Sports Therapy from Staffordshire University.

Please click on the links for more information about similar sports science and sports therapy services we offer through the Peak Condition and Sports Therapy (SUST) clinics.