A group of Blackburn Rovers FC youngsters are being monitored as they progress from the Under-12 to Under-14 age groups, to ascertain the effects of the increased training load on the cardiac function of young players as a result of the introduction of the EPPP.

The players are being tested on a cycle ergometer exercise test three times from 2015 to 2017. During the test, measurements of the structure and function of the heart will be obtained 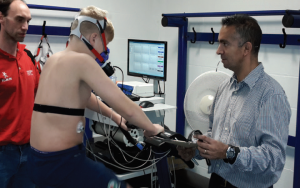 using echocardiography, as well as the aerobic fitness levels of the boys.

The second stage of this project was completed this year and the results are in the process of being analysed. The project was co-ordinated by Professor Vish Unnithan from the School of Sport and Exercise at Staffordshire University, who said: “The enthusiasm of the boys has been first class and the help of all the staff at Blackburn Rovers Academy, particularly Dr. Russ Wrigley, in helping to organise a complex project is very much appreciated by all the researchers. We are looking forward to coming back to the club in 2017 to complete the project.”