Staffordshire University 2016 graduate Gregg Jones has been discussing the experiences he has gained since embarking upon the early stages of his career as a Sports Therapist. Gregg emphasised the importance of his work placement requirements during his time at Staffs by reflecting how “it helped me massively because I got offered a full time job after! I completed my hours with The New Saints (TNS) FC in the League of Wales and continued to work for them on a voluntary basis for the rest of the season. The club were great with me and I impressed them enough to be offered a full time post.”

What Gregg didn’t anticipate when he started his time with the club was helping the team to become part of the footballing record books! During 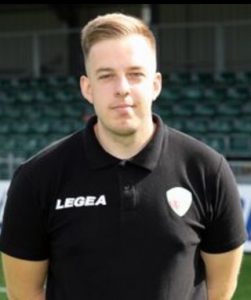 the course of his first full season TNS set a new world record for the most consecutive victories (27) breaking the 44-year old record set by the Dutch giants Ajax. Gregg stated “when you work in football there is no better feeling than when the team wins, and the form we were in was extraordinary. During this period I learnt how important it can be to keep players fit, and the importance the medical team are to ensure your best side can be picked week in week out.”

This record breaking run secured both the league title and a place in the Champions League qualifying stages for the club. “The most enjoyable part of the job so far has got to be working on the Champions League fixtures! Travelling around Europe, working pitch-side in some great stadiums and atmospheres is something that makes you realise that the hard work pays off!”

Gregg’s position working alongside the first team therapist as head sports therapist for the academy team further illustrates the growing recognition and importance of the role of Sports Therapists with football teams. Gregg’s day to day duties include the assessment, treatment and rehabilitation of injured players, developing strength and conditioning programmes and providing the match day pitchside support.
Reflecting back in this year in post Gregg stated “everyday has had its challenges, there is always something different that pops up whether you’ve been put in that situation before or not that makes you think. It’s made me realise that every aspect of the course has been, helpful some parts more than others, but I’ve been by surprised how much of the basics you use day to day, the course was very helpful but you can’t beat the hands on experience for finding out the therapist you want to be.”

The Sports Therapy team wish Gregg and TNS all the best for the remainder of 2017-18 season, and are delighted that successes of graduates such as this illustrate why Staffordshire University are currently ranked No.1 for employability .

To read more about our Sports Therapy success stories see the back copies of our SENSE newsletter. For more information about the Sports Therapy programme  click here, or contact programme leader Steve Bateman .