Katie Parker, who is studying for an online MSc in Applied Sport & Exercise Psychology at Stafforshire University has been nominated for the title ‘Talent Development Coach of the Year’ in the UK Coaching awards 2017. Winners of what are their 20th anniversary awards will be announced in London on 30th November. 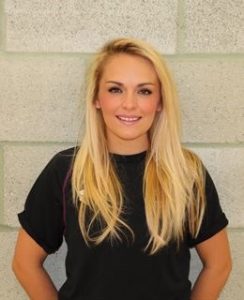 Katie said: “I am beyond excited to have been selected as a finalist for Talent Development Coach of the year by UK Coaching.  I am the only Strength and Conditioning coach nominated, which in its self is a huge achievement”.

Katie, with 10 years’ experience coaching football, lacrosse, cricket and athletics, has a background in elite sport. She began her career coaching goalkeepers at MK Dons and went on to coach at Watford FC. She has coached elite athletes in the UK, USA and the Caribbean and teams have included the Welsh international lacrosse team and four county cricket clubs.

In 2015 she was awarded the UK Strength and Conditioning Association’s emerging coach of the year award.

Katie who is currently employed as a Performance Sport & Fitness Officer at the University of Brighton is the first year of her 2-year part time MSc. and said:

“The online MSc. so far has been excellent. It enables me to study where and when I like and further my coaching career in a fascinating area without having to sacrifice my commitments to my work and to those I coach. It’s a win-win situation”

To find out more about our postgraduate programmes click here.