An Experience of Erasmus in Malta

The opportunity to go to Malta to complete the data collection for my dissertation came at just the right time, and my time in Malta has proved to be a wonderful experience. There are a number of reasons why it was wonderful, and of course, one of the reasons was the sunshine; when I left Gatwick, there was still plenty of snow around, courtesy of the Beast from the East, and when I arrived in Malta, it was almost 20 degrees warmer.

I arrived on a Saturday night, and made use of the famous bus network to arrive at my destination. This was, for reasons of financial prudence, the University residence in the centre of the island, in the village of Lija. However, although being budget accommodation for students, it did have one particular feature which turned out to be particularly enjoyable; the swimming pool. And from the point of view of a mature student, it was nice to find that there were many other mature students residing there. The residence’s pool is shown below, and shows a typical day; despite the odd day of rain, in my 11weeks on the island, most days looked like this: 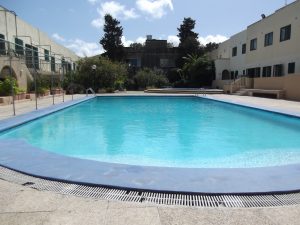 The pool was the perfect place to hang out with the diverse range of people studying in Malta; because the site also housed the main language school on the island, I was fortunate in being able to meet people from all over the world. In the course of the 3 months there, I spent time with people from China, Luxembourg, Japan, Finland, South Korea, France, Egypt, Italy, Canada, Spain, the US, Belgium, Columbia, India, Australia, and many other places besides. It may in fact, have been the most international experience of my life, which speaks volumes for Malta’s status as an international hub.

The university campus adjoins the Mater Dei hospital, and was where I was to meet my professor, whose PHd student I was also there to assist. Prof Grima is an enthusiastic practitioner of rowing, and in particular, of the distinctive style of rowing practiced in Malta, whereby four men in a boat propel the craft using two completely different styles; while two of the men row in the normal fashion, the other two stand up, and use the Venetian ‘gondola’ style of propulsion. It was the task of his PHD student to capture the 3-dimensional biomechanics of these Maltese rowers in the motion analysis laboratory, which was run by the podiatrists and physiotherapists of the Mater Dei hospital.

We soon strolled up to the hospital to meet Dr Alfred Gatt & Dr Cynthia Formosa, along with their podiatry colleague Matthew Schembri, who also happens to be an elite racing kayaker. This was an enormously fortunate coincidence for me, as I was in need of recruiting experienced kayakers who could come to a motion analysis laboratory. As it turned out, I couldn’t have come to a better place for the purposes of my study. Through the initial contact details provided by Mr Schembri, I was able to speak to a diverse range of kayakers; not only racing kayakers, but also polo kayakers, and sea kayakers. In addition to this fortunate situation, I discovered that there was something especially generous about the Maltese kayaking community, who all lent me so much support, not only for my data collection, but also in teaching me about the wider context of the kayaking world.

This kindness extended far beyond the efforts made to actually keep appointments in the laboratory. The coach for the Maltese kayaking racers, a former Olympian, was also kind enough to give me a lesson out between the yachts in Msida creek, just to the north of Valetta. This made me realise what a very different experience race kayaking is from the kayaking I’d known in the UK.

In addition, 4 of the 9 volunteers were also very experienced sea kayakers, with at least two of them having kayaked from Tunisia to Malta, and from Malta to Rome. To my great surprise and joy, they invited me to go sea kayaking with them on a particularly glorious day, where I was given the precious and rare opportunity to use not only modern paddles, but also Aleut & Greenland Eskimo paddles; something I hadn’t expected to happen, and particularly useful in that I was hoping to relate the captured kayaking biomechanics to phenomena seen in Eskimo archaeology, and which is thought to follow on from long hours of traditional kayaking. Having discussed the problems of towing whale and walrus carcasses for many miles, and the implications of this for Eskimo spinal mechanics, my kayaking colleagues were kind enough to let me tow them around the Grand Harbour, as the photograph below shows! (note the use of the Aleut paddle; something I would have struggled to find if I hadn’t lucked out in meeting the Maltese kayaking community; also note how blue the sea and the sky is; what a terrific day!).

This was one of the nicest days of the whole trip, as we kayaked from the Marsamxhett harbour to the north of Valetta, around the heavily fortified promontory at the end of Valetta, protected by St Elmo’s Fort, into the Grand Harbour to the south of Valetta. After a couple of hours, kayaking around enormous ships, and through a cave, we returned to Marsamxhett harbour, and surfed the waves back to the Sliema ferry terminal on the south side of Valetta, just to the right of centre of the picture below. 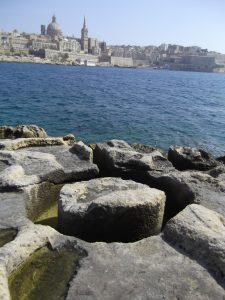 Perhaps no picture illustrates how pleasant an experience I had in Malta more than the picture my kayaking friends took of me that day; 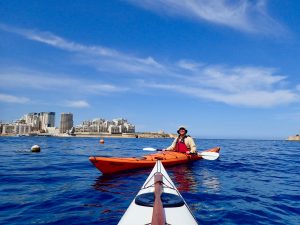 On the academic side, and in addition to the staff already mentioned, another colleague, Mr Darren Sillato, a physiotherapist with great expertise in running the laboratory, made himself available for support and advice at a moment’s notice, over the period of weeks. At the same time, everybody was happy to let me practice using the laboratory for the 3 week preparation period leading up to my data collection. To have such long-term and unlimited access to this technology was a priceless learning opportunity. It was also exceedingly helpful that the man who made all this possible, Professor Chockalingam, was also available during a visit to Malta, where he delivered a timely and useful overview of how to analyse the data that such laboratories can capture.

On the extra-curricular side, I was pleasantly surprised to find that even as a mature student, I was able to enjoy student life in much the same way as I did when younger, and the Erasmus experience has been a healthy reminder to me that university isn’t entirely about work, even for mature students; it can be a place where people can have fun getting to know each other too. As a result, I have taken away from Malta some of the fondest memories of my life, and remain eternally grateful to all the friends who helped make my time in Malta so enjoyable, in both spheres of experience.