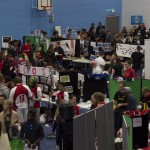 When you think about University clubs and societies you may be mistaken to think that it’s all about clubs such as Football, Rugby or Hockey and societies such as Acting, Radio and TV, but an increasing number are now being set up to go alongside and advance your academic study.
The “Biology Society is a fantastic way to get involved at University and make new friends whilst learning more about biology”. Bringing students from our biological and non-biological courses together in both social and learning environments, it’s a great way to meet people interested in living things. (Even creepy crawlies) 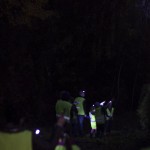 On Tuesday night we caught up with the society for a Bat Night being held on campus. The night start with a session by Dr Paul Mitchell, who talked about Bats and what we might expect to find, along with going through the equipment that we would be using before heading out into the night at the Universities Nature Reserve. 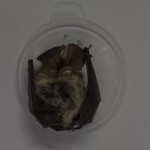 As we started walking around the reserve our bat detectors (which allows you to hear the bats within a human hearing range) began to click, and then we could see a number of bats flying around us. Continuing to walk through the reserve with torches lighting the way we found a little group flying in and out of the trees. [Now bats are hard to photograph due to them being really fast and flying at night, so here’s one that the Biology department had that we looked at before walking]

Unfortunately as we walked around no one found Batman, maybe the Marvel society had something to do with this….

With events such as Bat which took place last night as part of the Big Biology   Week, there’s always something to do with the Biology Society. This week alone they are running a number of events with local schools, working with year 5 and 6 pupils on bug hunts and showing them what the bugs really look like through microscopes, plus on Thursday 16th they will be running a Royal Society of Biology Pub Quiz in Ember Lounge for everyone to get involved with and test your biological knowledge. Then finally to finish off the week the society will be helping out with the Big Biology Day [link here] held in the Science Centre, where they will be running 5 different stands including using GloGerm Gel to show families how bacteria stays on your hands after washing them.

For more information about the society and what they do visit:

My Trip to Berlin in 90 Seconds

How to Prepare For Arriving in UK?

How it Felt to Get into Uni