This month has been quite busy indeed. It’s all been about the STUDENT LEADERSHIP RACE. It’s that time again but this time I took part for the role of STUDENT TRUSTEE. (So sorry about the emphasis there… it adds a dramatic touch methinks.)

Yes!  Ever since I sent in my manifesto back in February, it wasn’t until the start of March where I had realized I had been accepted to take part as a candidate. The funny thing was, it was my classmate Nathan who pointed out to me that my face had been on the Twister mat alongside all the other potential candidates.

My manifesto itself was about raising awareness of mental health as I believe, having witnessed friends and family members who have suffered with a form of mental health issue… how difficult it may be for them. I wanted to lead a campaign which allowed all students to be understanding of the different forms of mental health issues that are there as well as helping students who are currently suffering in silence, letting them now that they didn’t have to suffer alone and there are people and services available around the university that are openly, willing to help them whenever needed. 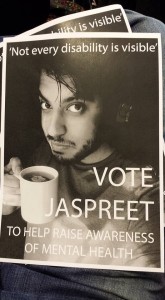 When voting week started, I immediately began to design a poster that would be my aid throughout my campaign. I had decided to use social media as my main campaigning approach as I believe it was an influential way of getting my message across towards a large number of audiences.

When voting day eventually came, I had made my way towards the main Staffordshire campus, where I was led into the TV studio where the winners would be announced for the Student President, Vice Presidents and Student Trustees. After an excruciating wait… the winners were announced and I can happily say that… even though I did not win the position this year, I am 110% thrilled at the new Student Union team and I know that they are going to put in all the effort they can muster to make sure that the voices of students around the university are heard.

My Brain is Melting