There are many ways to define creativity. We are especially interested in divergent thinking this is the ability to come up with lots of ideas and is a key skill involved in problem solving and creativity (Guilford, 1975). Although divergent thinking has been studied extensively in adults and older children very little is known about the development of this skill in young children. A current challenge is that there are very limited methods of assessing divergent thinking which do not rely on children’s linguistic skills. Torrance (1981) developed the test of Thinking Creatively in Action and Movement, and although this test can be used with children from as young as three years old it relies on their ability to follow verbal instructions such as ‘Now you do something different’ which more recent evidence suggests that 3-year-olds will struggle to understand (Goswami, 1992). The only existing test of divergent thinking which does not rely on verbal understanding is the Unusual Box Test (Bijvoet-van den Berg & Hoicka, 2014). 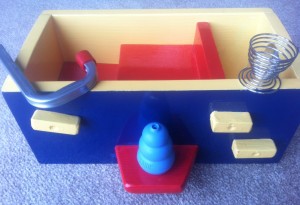 To assess divergent thinking the box is placed in front of the child by the experimenter. The child is then presented with five novel objects and the actions they make with the box and objects recorded (using a video camera). No specific questions are asked of the child, other than to play with some toys. The actions that the child makes using the toys and the box are subsequently coded by researchers according to criteria developed by Bijvoet-van den Berg & Hoicka.

We are currently developing a second Unusual Box which can be used to measure divergent thinking in toddlers and pre-schoolers. This second measure is required so that the effect of other activities (e.g. screen time, engaging with digital technology, book reading, free play etc…) on divergent thinking can be investigated. Having two tests of divergent thinking will mean that toddlers and pre-schoolers will be able to take part in one test to establish a baseline score and a second test to establish any effect of the other activity on their divergent thinking skills. To achieve this the two tests must be similar yet different (so that learning on one test cannot be transferred to the other test). Therefore the objective for this project is to develop a new unusual box which children can play with in a similar way to the old unusual box.