Young children’s interpretation of dog’s emotions and their intentions to approach happy, angry and frightened dogs

Young children (between 0 to 9 years old) have been found to be at the highest risk of being bitten by a dog (Mullins & Harrahill, 2008; Kahn, Bauche, & Lamoureux, 2003). Furthermore, the number of hospital admissions due to dog bites has increased by 76% in the last decade with admissions continuing to increase (Health & Social Care Information Centre, 2015). The increasing instances of dog bites among children is an international phenomenon (Bjork et al., 2013; Gilchrist, Sacks, White & Kresnow, 2008; Ozanne-Smith, Ashby & Stathakis, 2001) and can be seen from data obtained during telephone interviews 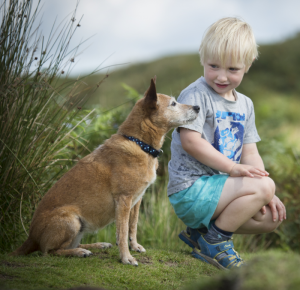 (DeKeuster, Lamoureux & Kahn, 2006; Sacks, Kresnow & Houston, 1996) as well as hospital admissions (Kahn, et al, 2003; Kasbekar, et al., 2013; Schalamon et al. 2006). Dog bites not only lead to wide range of often serious injuries among children (e.g. Venkatesh, Bhaskar & Vepakkomma, 2016) but also psychological consequences as it has been found that over 50% of bitten children develop symptoms of post-traumatic stress disorder (PTSD) (Peters, Sottiauz, Appelboom, Kahn, 2004). To prevent dog bites among children a better understanding of why children are likely to get bitten is required.

To test children’s ability to recognize dog’s emotions and knowledge of how to behave safely around dogs 147 children aged 4 to 7 years have been shown images and video clips of happy, angry and frightened dogs.

Our preliminary findings suggest that young children were good at recognizing happy and angry but only just over half of 4- to 5- year old’s accurately recognizing frightened dogs. Even more worryingly children were inclined to approach frightened and this was true regardless of whether they had correctly identified the emotion or not. This suggests that to reduce the number of dog bites in young children our priority should be teaching children how to behave appropriately around frightened dogs. If you are interested in reading more about this research please download a copy of our accepted manuscript. We are currently developing some projects to investigate this idea further.