A few days in London recently, packed with Metropolitan high culture events and some of a distinctly low-culture nature, such as walking around in Woolwich’s pedestrianised centre in the middle of a Saturday night…. Next morning: thick fog.

The river bus into town was not running. The pier stretched out quite far into the very fast-flowing river (tide was going out), with barges and other shapes emerging like clutter in dim spectral outlines from the gloom. 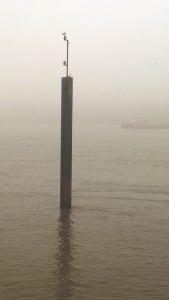 Curious to notice (Modernism module at Staffs Uni!) that not too far from here the barge in Heart of Darkness is placed mid-river: hub of the ensuing narrative, with Marlow trenchantly cutting in with the remark that ‘this also … has been one of the dark places of the earth.’ From the river vantage point, London appears like the ‘monstrous town … marked ominously in the sky’. 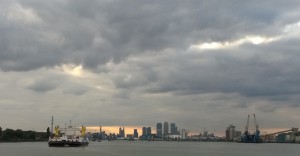 High points: Rona Munro’s James Play at the National, in conjunction with the National Theatre of Scotland, part one of a trilogy of ‘Scottish Plays’. Brilliantly done in the tradition of Shakespeare’s History/Henriad plays, with the grandeur and attention to detail customary at the National. Stellar cast (part three will include Sophie Grabol of Danish crime/jumper fame). Balletic fight scenes; modern parlance in refreshing contrast with ancient setting. Strong female (counter)parts. The intention of staging these as ‘Nation Plays’ was clear as an intervening theatre statement in the debate of Scottish independence. – To the Barbican next day, for a matinee of Ibsen’s The Enemy of the People in a guest performance of the Berlin Schaubuehne (in German with running translation). The text, somewhat rusty owing to the passage of time, was rendered in a new version which completely transferred it into the contemporary situation, totally topical with a young couple suffering from the hubby (feminist wife, young baby, nappies et al),  a scientist rebel,  sticking to the truth of his findings (unto the last at least). Great show! Who would have thought it possible with good ol’ Ibsen to boost up theatre as agitprop (lashings of Marcuse involved), complete with reconstructing a stage repainted half-way through. A lecturn was placed in the centre. Lights went up half power. A vigourous debate was ‘staged’ with the audience (for real in the fictional play setting). The house was heaving with anti-corporate/media radicalism. The Fourth Wall came crashing down; borderlines got blurred. The audience loved it (me too). A blast from the past: refreshingly Berlin, ca. 1969/70…

And then to Kiefer – big retrospective in the Royal Academy, with much new work. Powerful stuff, anti-Wagner; anti-Fascist; against oblivion; post-modern; intertextual (Celan), some of it playing on Surrealism (e.g. Max Ernst and frottage).