George Papandreopoulos, friend, scholar, and real European (Greek) gentleman, submitted his PhD thesis last Wednesday, on ‘Nietzsche and the Overhuman’, supervised by Professor Douglas Burnham and co-supervised by me.

George presented me with a copy of the final version in the office, 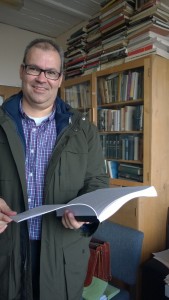 and he read out the final, concluding couple of pages ending with an ironic apotheosis of Greek culture, and an outlook into the future of European philosophy: the Nietzsche project has come full circle; the end links beautifully with the beginning… I was moved.

It may be of interest to note that Nietzsche derived the much demonised notion of the ‘Overhuman’ from quite a benign source. Behind it is to a large extent an essay entitled ‘The Over-Soul’, by the American Ralph Waldo Emerson, published in 1836 . Emerson’s essays were a lifelong source of inspiration for Nietzsche. He was in possession of the first volume of Emerson’s Collected Essays, in the first  mid-C19 German translation. The book, now in Nietzsche’s hand library in Weimar, accompanied him on his wanderings, as can be determined from the underlinings and marginal notes in Nietzsche’s mutating handwriting. Evidently, he consulted it over the three main periods of his entire writing career. Emerson, together with his friend from across the Atlantic, Thomas Carlyle, had honed the new, genuinely modern  literary form (Montaigne) of the essay into a fine art. The flexibility of composition in an essay, its aesthetic dimension around topic investigation, appealed to Nietzsche who was trying to find new ways of making philosophy relevant again in an age of rapid cultural and social modernisation. Traditional Idealist system-building philosophy was no longer up to the job: too clunky and rigid. Future writing had to be like a fine spider’s web stretching over a stream of white water. 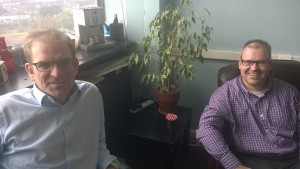 (The haze is owing to bad photography, not to inhaled toxins.)