The Royal Exchange in Manchester has a reputation for staging Shakespeare plays in a way which demonstrates the Bard’s relevance to the now. Maxine Peake’s Hamlet in 2014 was a stunning example of relevant and inspiring Shakespeare. As the programme for Lear tells us, there are 3 productions being staged, in this 400th anniversary year of the playwright’s death, which cast black actors in lead roles: Don Warrington as Lear here, Paapa Essiedu as Hamlet at the RSC and Ray Fearon as Macbeth at the Globe.

While Don Warrington is clearly the star of this show, the whole cast are impressive. Warrington is an imposing actor, who gives great presence to Lear in all his manifestations: as patriarch, deluded parent, mad man, and tragic father-king. Special mention, however, must go to Miltos Yerolemou as Lear’s wise Fool and to Fraser Ayres for his terrifying Edmund. But it is unfair, I think, to pick anybody out. This production emphasises the humanity of the three tragic characters (Lear, Cordelia and Gloucester), rather than the politics of a state divided.

The Royal Exchange is a brilliant theatre. Playing in the round, with only the most essential of props (a throne for the king, a chair each for the sisters) creates a genuinely intimate experience of the play. We booked these tickets way in advance, and since opening the production has received rave reviews (“as close to definitive as can be”, according to the Guardian). As a result, tickets are hard to come by; but if you can get one it’ll be worth the struggle. 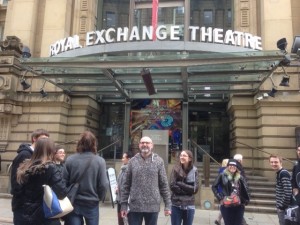 Staffs Uni paid for the tickets and the coach, while Manchester offered us different city experiences: some set off for a gallery, others to the shops, and some of us to the bohemian shabbiness of Affleck’s Palace. And for lunch: you cannot beat the Northern Soul grilled cheese café and their magnificent Philly cheese steak sandwich – probably the best outside of Philadelphia and one of Manchester’s coolest street food experiences. 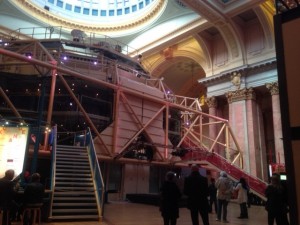 Inside the building. Is it a theatre or a spaceship?

As an added bonus, Sally bumped in to and instantly recognised 2 of the actors (who played the Fool and Oswald) at ComicCon in Stoke the next day.