The lovely people at Northern Broadsides theatre invited me to see a read through of their upcoming production, Cyrano de Bergerac. A read through is quite close to a performance, but with the script in hand. This adaptation, from award winning playwright Deborah McAndrew, retains some of the rhythms and rhymes of the original (which was entirely in couplets). 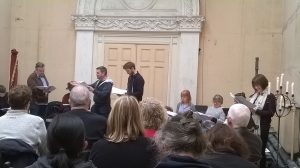 The story is probably best known from the Hollywood version starring Steve Martin, which is played pretty much as a joke about Cyrano’s big nose. Here, Cyrano is a talented Renaissance man who displays equal panache with his sword and his verse. But his ugliness is his curse and is contrasted with the beauty of Roxanne. He can only admire her from a distance, until his skill with words is needed by a handsome but intellectually limited cadet who takes Roxanne’s fancy. McAndrew demonstrates a keen ear for comedy – even in verse – and handles the poignant resolution with… well, with ‘panache’

I can’t wait for the production at the New Vic theatre early next year.

It was fascinating to see, along with a small invited audience, part of the creative process. Director, Conrad Nelson, and McAndrew told me afterwards that performing the play in front of a small audience is part of the ‘alchemy’ that animates a work, and it allows them to get a sense of what needs to stay and be drawn to the audience’s attention, and what needs to be cut. For the creators, showing us a bit of ‘how it’s made’ also allows them to bring friends of the company together and show off interesting buildings in the area.

The Wedgewood Institute, where we were gathered, is about to be renovated as a result of a grant from the Prince’s Regeneration Fund. It was built in the mid-nineteenth century for the education of the factory workers of Burslem and it stands opposite the equally impressive Burslem School of Art, whose famous alumni include renowned artists such as Arthur Berry and ceramic designer, Clarice Cliff (google her stuff if you don’t know it, it’s wonderful).