Katrina Robinson, a level 4 student on the Criminal Justice with Offender Management degree, and students from the School of Law, Policing and Forensics went on an educational trip to Dovegate Prison last month, with Course Leader Louis Martin and lecturer Dave Simmonds.

I didn’t know what to expect when walking into the prison, as it was my first time being inside a male Cat B prison.  I was aware of the variety of sentences being served by the prisoners, being high security and I kept an open mind. 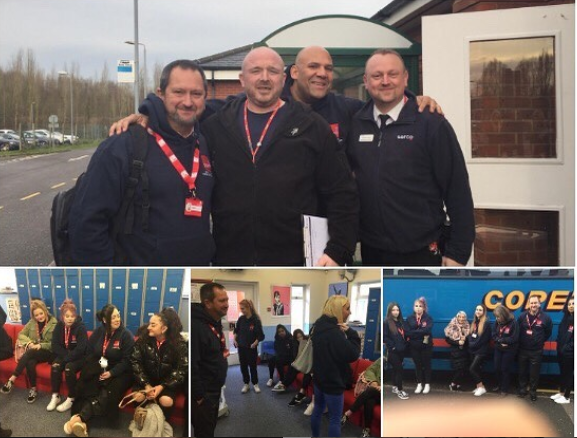 Upon arrival, we were greeted by Custodial Manager Brendan, and Prison Custody officer, gym instructor and staff trainer Simon. We all gathered in the reception waiting area where it was explained to us the itinerary for the day. [We then] proceeded to the training room, where current prison officers were undertaking their annual training programme and continued to the security check area where we were all searched before entering the prison grounds.

Once on the grounds, I was surprised to see how big the area was, and the prison itself was set out in different buildings rather than one big building.  We followed the walkway around the buildings and was told to stand aside as an alarm was set off and many prison officers ran towards the alarm. Brendan, after checking on the situation, explained that prisoners inside the visiting area had set the alarm off by accident.

The first building we entered was the gym where it was recorded 45 prisoners were there all using the gym equipment, some of which had use of the facilities 4 times a week due to their being on enhanced level of Incentive and Earned Privileges.

Once we left the gym, we carried on the walk past the Vulnerable Persons Wing, which we weren’t allowed to enter due to the severity of the risk involved and headed towards the Offender Management Unit.  Within the Offender Management Unit O9MU), it reminded me of a standard office setting, with Multi agency staff all working together.  Here we were met by the Manager of the department who talked us through the daily running’s and what the OMU’s staff responsibilities were, such as sentence plans and rehabilitation plans.

After leaving the OMU, we headed towards the Therapeutic Centre (TC), also known as a prison within a prison which had a completely different feel from the main block. Brendan and Simon explained that we were going to meet and talk to 6 prisoners serving a range of different sentences.  Brenden advised us to ask as many questions as we would like, due to the prisoners being in therapy, anything they talk about they are open and willing to do so.

Here, we learned the reasons why the prisoners committed the crime and their childhood experiences; [they] all showed immense remorse for their actions, and the one thing that was great to see was their attitude towards life and looking forward to their future once released.  All the prisoners that we spoke to all agreed that the therapy that they were having has helped them massively to move forward and towards being a better person.  The conversations were accompanied with lunch that was put on for us all. [It] was a relaxed and calm atmosphere and I felt very safe.

We were then shown the wing in which they live and were lucky enough to see inside one of the cells. The TC wing was segregated from the main block, which I feel was a good choice, as the prisoners at the TC chose to enter therapy and not to get mixed up in any trouble that may occur within the main block.

After leaving the prison and back on the coach, I had time to reflect on the events of the day. I was so happy to have been able to go to Dovegate.  It was a fantastic opportunity for us all, which we’d never have the chance to experience without Louis, Dave, Simon and Brendan for which I’m extremely grateful.