We are telling the story of Appetite through a series of cases studies from audiences, community hubs and participants. This page will link to the different case studies as they become available.

In 2015, as an active member of the Brighter Futures Community Hub, Theresa commissioned the successful show Reading the Riot Act.

Rachel from Stoke-on-Trent City Council’s Culture Team has been involved in the Appetite programme from the outset. She has seen first-hand how Appetite positively impacts local residents, engaging families with arts events and improving people’s perceptions of Stoke-on-Trent, especially the City Centre.

Janet is the Chair of the Meir Christmas Events Board and worked with Appetite for the Consumerist Christmas Tree to be constructed for Christmas 2014.

“I am not sorry I did it,” Janet says of the Consumerist Christmas Tree. “I honestly believe that people from all round the city came just to look at it. It certainly put Meir on the map!”

Sarah Richardson, a theatre-maker and education theatre practitioner, successfully applied for Appetite’s The Kitchen funding for a research and development project called Out in the Playground, which explored the idea of using school playgrounds as venues for theatre.

Kat Boon, a local playwright, received funding through Appetite’s The Kitchen to create the play Stories from Pub Corners.

“We did not feel like asylum seekers, we demonstrated our stories in our work.  Read Ayad‘s Story here

Theresa worked with Nic Winstanley and Sarah Nadin to develop a creative case study to help tell her story.  The video shows the final product and how it opens to reveal the journey she has been on with Appetite.

In the second round of Appetite’s ‘The Kitchen’ seed fund for professional development and research, Restoke was awarded funding to develop their latest participatory performance, ‘The Voyagers’. Cathie, a recently self-employed creative practitioner, volunteered to sing in the choir for this performance, along with her husband Erik and stepdaughter Taylor.

She worked with the Get Talking Artists in Residence, Nic Winstanley and Sarah Nadin, to develop a creative case study. The video is of Cathie developing a woollen structure to help illustrate her story.

Stoke South Carnival Committee worked with Appetite in the Summer of 2014  to commission an artist to create a replica of Old Bill, a Tommy Tank used in WWI, to be used as a centre piece for their carnival.  This is their story.

Year One: The Taster Menu

Creative People and Places have written a case study about Appetite’s Taster Menu. 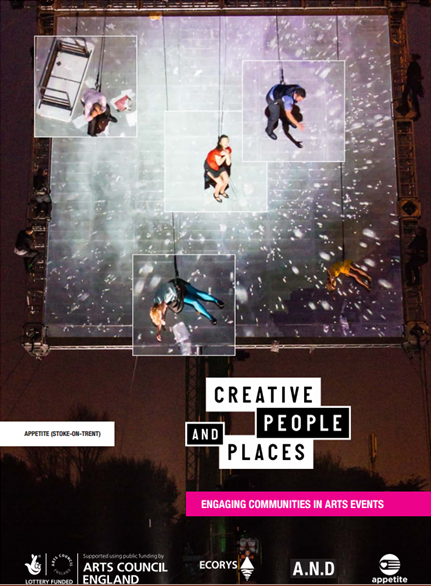 Sharon, a local artist, tells us her story about the Taster Menu.

Stephen is a Community Hub member from Bentilee in Stoke on Trent.  He developed a creative case study with an Illustration Student from Staffordshire University to tell his story about his first encounters with Appetite. Click on this link to see his illustrations: Stephen’s Appetite story

Nicky from Thomas Boughey Children’s Centre told us about how she was involved with Jelly and Ice Cream, a storytelling project commissioned by Appetite in Autumn 2013. This is her story.