The 2016 version of one of the big league tables is out, accompanied by a commentary. The commentary is all about how the huge rise in tuition fees several years ago resulted in an equally huge increase in services University’s offer. (Actually, this may have had more to do with the fact that bond yields were historically low; so Universities could borrow more cheaply.)

One piece of evidence for this was the drop in SSR — student to staff ratio — over the period. Great. Except… this figure is not by any means equivalent to ‘class sizes’, as the commentary claims. Indeed, the claim is made that investment in advance of the Research Excellence Framework contributed to lowering this statistic. RAE investment is not primarily investment in teachers. Instead, it is likely investment in senior researchers, whom undergraduates will never see; and in part-time or zero-hours teachers who soak up the load so that headline staff can work on that research project.  The number of academic bodies around the place rises, relative to student numbers, but class sizes may in fact go up, as students are herded into big rooms to be taught by a handful of faces whose photographs were not in the prospectus.

And by the way, this is another of the league tables that includes entry points as a measure of quality. People across the University world have been complaining about this for years, but one more time: Imagine, for a moment, that you are reading a movie review. The review says that the plot is incomprehensible and silly, the acting wooden, and the direction lazy. But, it concludes, the film is popular among cinema-goers (who have never seen the movie), and therefore it must be good. Five stars! Movie of the year!

This is an interesting one: a MOOC on climate science, but with an important difference. It is not simply presenting the science, in the objective way that we all believe science is supposed to work. Rather, it is presenting strategies for swatting aside climate change deniers. It is essentially weaponising a scientific position. Many of us won’t object to this, since after all the position is one we support and, moreover, climate change deniers have played hard-ball for years now. Nevertheless, I for one am a little uncomfortable, in a way analogous to the way I am uncomfortable with any other ‘fighting fire with fire’ approach: fighting criminals who would impose upon our freedoms by … restricting our freedoms; or fighting religious extremism with …  satirical extremism. Something to think about anyway.

UPDATE: On the other hand, when you’ve got this to contend with, maybe real science could do with being weaponised.

The Washington Post ran a big piece yesterday contrasting the expansion ambitions of HEI systems in New York state and in California, with the gridlock on higher education expansion experienced in Washington. The unquestioned assumption in the WP, however, is that expansion is a good thing: that future economic development depends upon an ever larger provision of degree-educated workers. The Presidency agrees, but getting anything done in Washington is like pulling teeth — on a really annoyed, rabid dog.

But it is just this assumption that is being questioned, from both right and left. Paul Krugman, Nobel laureate and the nation’s favourite liberal economist, argues that recent evidence suggests graduate-level employment may have plateaued, in part because automation can deal with sophisticated, graduate-level tasks much more easily than it can with skilled but ‘common sense’ tasks, like installing an air conditioner or pruning a pear tree. Interestingly, an opinion piece in Forbes agrees. Both conclude that tackling income inequality through higher education is a mistake.

The UK experiment with vastly expanded higher education provision would seem to be relevant here. Are graduate level jobs holding up, and graduate level unemployment staying low? Another, very different question arises, the answer to which everyone above just assumes: is access to higher education only about the economy? Even in the domain of equality (see the immediately previous post), is income equality the only measure? 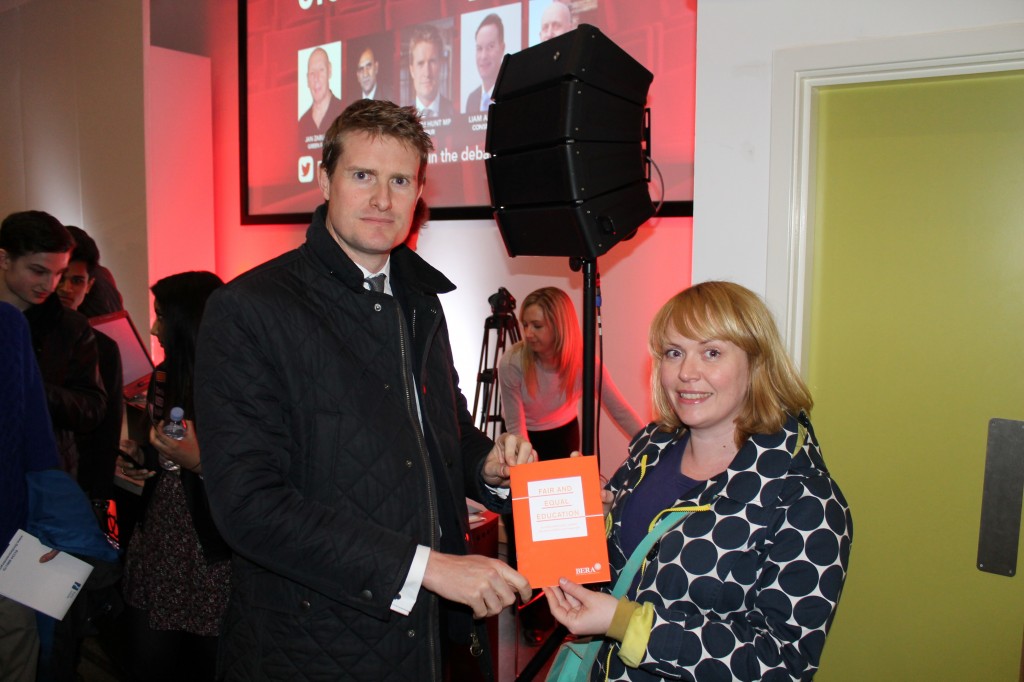 You can download a copy of the complete manifesto at http://bit.ly/1NyulvA.

The manifesto we have developed makes recommendations about how the Government, educators and the wider public can work towards a more equal society. We think, given the evident problems of our increasingly unequal world, that it is essential to reinsert the word equality back into discussions about the futures of children and young people, and recognise that we need to do more than offer ladders for social mobility to a few.

Over Easter weekend, the New York Times published an editorial about university funding, the headline conclusion of which was that the cost of higher education (i.e. tuition fees) was rising not because of decreasing state support, but because of ‘bloated’ administrative costs. Although one might want to sympathise with the latter half of the claim — especially given the UK pay survey reported in the THE at roughly the same time — the web erupted in anger over the first claim. See comments here and here.

It seems to me, however, that both sides are enlisting statistical facts in a disingenuous manner. There are some costs associated with running a higher educational institution that are not directly proportional to the number of students. (Running a football team would be a facetious example; running a library, producing marketing material or giving a lecture are a better ones.) The crisis in small liberal arts colleges should be understood — in part — in just this way. This means that a doubling of student numbers does not in principle need to be accompanied by a precise doubling of funding. This explains the NYT contributor’s bizarre analogy of military bases. But, it does not prove his case, since there are few if any costs that have no correlation at all to student numbers.

However, the lesson for us in the UK is that a proliferation of small institutions, each running their own show, is a recipe for funding difficulties now and in the future. This is, by the way, the other side of the too-much-concentration argument that Jon and I have been rehearsing on this blog. The relationship between size of each element, and the number of elements (likewise the diversity of missions of each), surely can be optimised for any given system of provision. At the moment, though, it is not optimised on either side of the Atlantic. Here, for example, official policy encourages a proliferation of small HEIs, but then only adequately funds roughly 20% of them.