Jake Edwards, who is reading law at Staffordshire University, has been awarded a named scholarship by the Middle Temple Inn of Court in London. 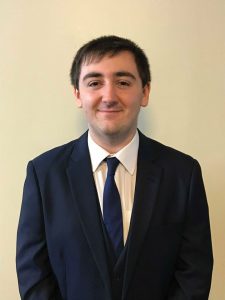 Jake applied for a scholarship for funding towards his Bar Professional Training Course in November 2017 and underwent a rigorous interview in London, in April this year. He excelled in all of his level six modules and still found time to prepare for the scholarship process by working with barristers from all over the country. Jake took part in a session held in the Law School in March to provide other students with tips and hints to achieve the dream on putting on the wig and gown.

A representative from the Middle Temple contacted Jake on Thursday 10th May to let him know that he had been awarded the State School Scholarship. This named award is awarded to a state-school educated candidate. Despite its name, this is a prestigious award and will look amazing on Jake’s CV for the future.

Jake was thrilled to pieces that all of his study and preparation had payed off. Jake commented: “I had some great lecturers and help along the way. I want to say a particular thank you to Gill Davenport who taught me the skill of mooting as this has really helped me. I also want to thank my personal tutor Keith Wharton for always believing in me.”

Jake follows a number of other successful Staffordshire University Law students who have been awarded top flight scholarships over the last three years. Last month Anthony Miller won the Lord Denning Scholarship from Lincoln’s Inn. In 2017 Arpan Bedi was awarded the Harmsworth Scholarship again from the Middle Temple. Law School lecturer and mooting specialist Gill Davenport commented: “Jake was an outstanding student on my level six mooting module this year. Our students keep winning scholarships; hopefully there is a pattern here!”