The Department for Education (DfE) is responsible for education and children’s services in England. It works to achieve a highly educated society in which opportunity is equal for children and young people, no matter what their background or family circumstances. DfE is a ministerial department, supported by 9 agencies and public bodies.

Good financial health in all schools is critical to good business management and to good outcomes for pupils. The Government has protected funding for schools, which will rise as pupil numbers increase. However, as with other public services, schools will need to take action to improve value for money due to the costs pressures on their budgets. DfE want to identify a whole sector, long term, and sustainable approach so that schools can meet this challenge. Despite a wealth of information being available to schools, we know that not all schools have the capacity, and/ or skills to manage their finances as effectively as they could, and that there is currently a wide range in the amount and quality of engagement within school leadership teams.

Applicants and potential developers should be willing to participate fully at the event and as the competition progresses. For further information or to register for the briefing event please contact Ian Everett. Interested organisations should register their interest in attending the briefing event with DfE by email by no later than 25 January 2016.

Funding is provided at the discretion of the Trustees.

Previous grants have been given in the following areas:

Applications may be submitted at any time, and UK registered charities are eligible to apply.

Examples of previously funded organisations include:

The Trust does not maintain a website or a formal application form.

Applications should be made in writing to the Trust.

Don’t forget, the Erasmus+ calls for 2015 are out now. We have blogged on this already, but it is a fund that the University has a lot of success with and fits well with all research areas, so if you have not looked at what the funds are about yet, read this post.

Erasmus + provides grants for a wide range of actions and activities in the fields of education, training, youth and sport. The programme gives opportunities to students, trainees, staff and volunteers to spend a period abroad to increase their skills and employability. It supports organisations to work in transnational partnership and to share innovative practices in the fields of education, training and youth.

Details of each call can be accessed from the 2015 programme guide. http://ec.europa.eu/programmes/erasmus-plus/documents/erasmus-plus-programme-guide_en.pdf
The programme guide is the first port of call for anyone interested in applying. Each call has a 3-4 page summary of what sort of projects the commission are looking for fund and how much funding you will get.

Below is a list of the open calls, their closing date and the page in the programme guide to get more details.

Erasmus + provides grants for a wide range of actions and activities in the fields of education, training, youth and sport. The programme gives opportunities to students, trainees, staff and volunteers to spend a period abroad to increase their skills and employability. It supports organisations to work in transnational partnership and to share innovative practices in the fields of education, training and youth.

Details of each call can be accessed from the 2015 programme guide. http://ec.europa.eu/programmes/erasmus-plus/documents/erasmus-plus-programme-guide_en.pdf
The programme guide is the first port of call for anyone interested in applying. Each call has a 3-4 page summary of what sort of projects the commission are looking for fund and how much funding you will get.

Below is a list of the open calls, their closing date and the page in the programme guide to get more details.

Further Information
The External Projects Team will be preparing summaries of the actions and posting them on the blog www.staffs.ac.uk/researchfunding
Erasmus+ website http://eacea.ec.europa.eu/erasmus-plus_en

The European Commission will be launching the first call for the new Erasmus+ scheme Capacity Building Projects in Higher Education in autumn.

The Capacity Building Projects in Higher Education scheme replaces the former TEMPUS programme. Staffordshire University has considerable success with this scheme and acted as partner and lead organisations on projects.

The partner countries from outside the EU can include:

Projects will have to involve at least three universities from three different Programme countries and two universities per Partner country involved.

They aim to modernise and reform higher education institutions through activities such as:

Time from the call opening to the deadline is often tight. There is not much chance to find partners and write the bid. This is a good time to start thinking about whether you are interested in applying and talking to potential partners to collaborate with.

The grant is intended to support the following costs related to the implementation of the project:

Please could anyone interested in applying let the External Projects Team know so that we can start supporting you with identifying partners? externalprojects@staffs.ac.uk

As the calls are not launched yet there is no additional information on the programme. If you want to keep up to date with what is happening we expect details to be launched on the Erasmus+ website here:

In relation to what is generally referred to as ‘Pre-publication research’please note that the Intellectual Property Act 2014 (which is enacted but not yet in force – coming into force on 15 July 2014), by section 22A, has created a novel exemption from the Freedom of Information Act 2000, for pre-publication research. The exemption obtained in the course of, or derived from a ‘programme of research’ will amount to exempted information if the following conditions are met:

(a) the programme is continuing, with a view to publication by a public authority (cf. Universities are public authorities pursuant to Schedule 1 Part IV clause 53 of the 2000 Act), of a report of the Research…and

Commentators have remarked that in all the circumstances of the case, the public interest in maintaining exemption must be balanced against and outweigh the public interest in disclosing the information, and that each case would be decided on its own merits. The writer knows of no provisions referring to this balancing exercise, however it is generally recognised that the new exemption would allow Universities as Researchers to consider and validate their research work before putting it into the public domain.

Section 22A(2) is a new provision whereby the Authority (cf. the University) would not be obliged to ‘confirm or deny’ whether they hold exempt information, if by doing so this prejudices the above factors listed (i) to (iv) above.

When the writer comes across further elucidating commentary on the new section 22A Research exemption they will be posted further in this blog.

The link to the new Intellectual Property Act 2014 (adding the new section 22A to the Freedom of Information Act 2000) can be found at:

The Society for Educational Studies invites applications for its small grants. These aim to stimulate research in education, particularly by those who are starting their research careers and are no more than five years postdoctoral.

Applicants must be affiliated with a British university, college or school, and be or become members of the society.

Up to four grants worth up to £10,000 for one year are available. The SES is unable to meet the full economic costing of a project. Non-FEC salary costs of up to a total of £5,000 will be considered in relation to an application.

For further information go to: http://www.soc-for-ed-studies.org.uk/grants/

The European Commission are encouraging Higher Education institutions to work in partnership with businesses on innovative projects that address teaching and learning. The projects are expected to generate long term partnerships which develop entrepreneurship.

The funding is called Knowledge Alliances and is part of the Erasmus+ scheme. Although the deadline for 2014 has recently closed, it takes time to develop a strong consortium and project idea. The External Projects Team is encouraging staff to get thinking on project ideas for 2015. To help have we have created a factsheet giving an overview of the fund.

It is expected that the 2015 deadlines will be in March/April, with calls coming out around November 2014.

The External Projects Team can help you to find project partners and can help develop project ideas. Anyone who is interested should contact the team on exteranlprojects@staffs.ac.uk 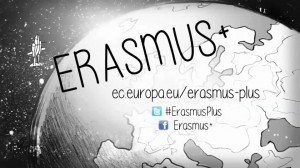 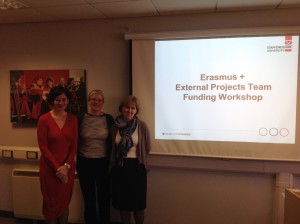 The External Projects Team led a workshop this week in the Ashley Centre, over 25 staff from across the institution attended to hear about the new EU funding programme for education and youth, ERASMUS+. This new programme replaces the old Life Long Learning Programme as well as Erasmus Mundus, Tempus, Asia Link, Youth in Action and Edulink. The team were joined by our Erasmus Co-ordinator Deb Graddon who shared the latest news on our Key Action 1 bid (mobility of staff and student from SU) and Abdel Hamid Soliman who gave a great overview of a current Erasmus Mundus project PEACE.

If you are interested in this programme, there are a number of ways to find out more, you can access all of the current calls for proposals in the Programme Guide or if you would like access to the slides from the day, please email us at externalprojects@staffs.ac.uk

In the Supreme Court this week (The Queen on the Application of T v Secretary of the Home Department and others, there was consideration of the thorny issue of disclosure of a person’s past in terms of ‘spent’ criminal convictions; including cautions warnings and reprimands, and in this appeal to minors (persons under 18).

The case is of interest because in the case of one of the Appellants, T, born on 3 May 1991, when aged 11, received two warnings from the police in connection with two stolen bicycles. Although the warnings were in the jargon “stepped down” – in that only the police would retain access to the warning or caution, and not be disclosable to third parties. Nonetheless, when T sought to apply to study at University, the University sought an Enhanced Criminal Record Certificate (ECRC) and received notification of the stepped down warnings. It was apparent that stepping down the cautions and warnings, was not a procedure the police could follow, and they were obliged pursuant to amendments made to the Rehabilitation of Offenders Act 1974, to disclose details of the warnings to the University upon request.

The Court of Appeal decision is attached, containing the full facts of all the combined appeals (with appeals in relation to more serious offences than the alleged theft of two bicycles in the case of T.

It will be helpful to have clarification as to the extent to which a person in a similar situation to T, being minors at the time of offending, making applications into further education, and then into employment would continue to be either required to continue to disclose their own past, or be affected by disclosure of previous offences by third party agencies. The Court of Appeal indicated that in their view such disclosure was disproportionate and in breach of his Article 8 rights (please see the Court of Appeal decision for the wording of Article 8 – right to respect for private and family life), and it remains to be seen whether the Supreme Court would take a similar view.

The facts of the case of T, potentially relevant to those entering in to full time education or employment, with similar past infractions, are set out in the Court of Appeal judgment attached.