As I helped to unload the wild array of implements for the day, the sky above did not look to be as kind as the previous weekend. Along with the rest of the ‘Get Talking’ troops, I pushed on and set out the stall; for what we hoped would be (despite any turning weather) a barrage of smiling, excited, art loving revelers. The previous weekend was one of anticipation and not knowing what to expect, my ride this day, I hoped, would be one of expectation and involvement. 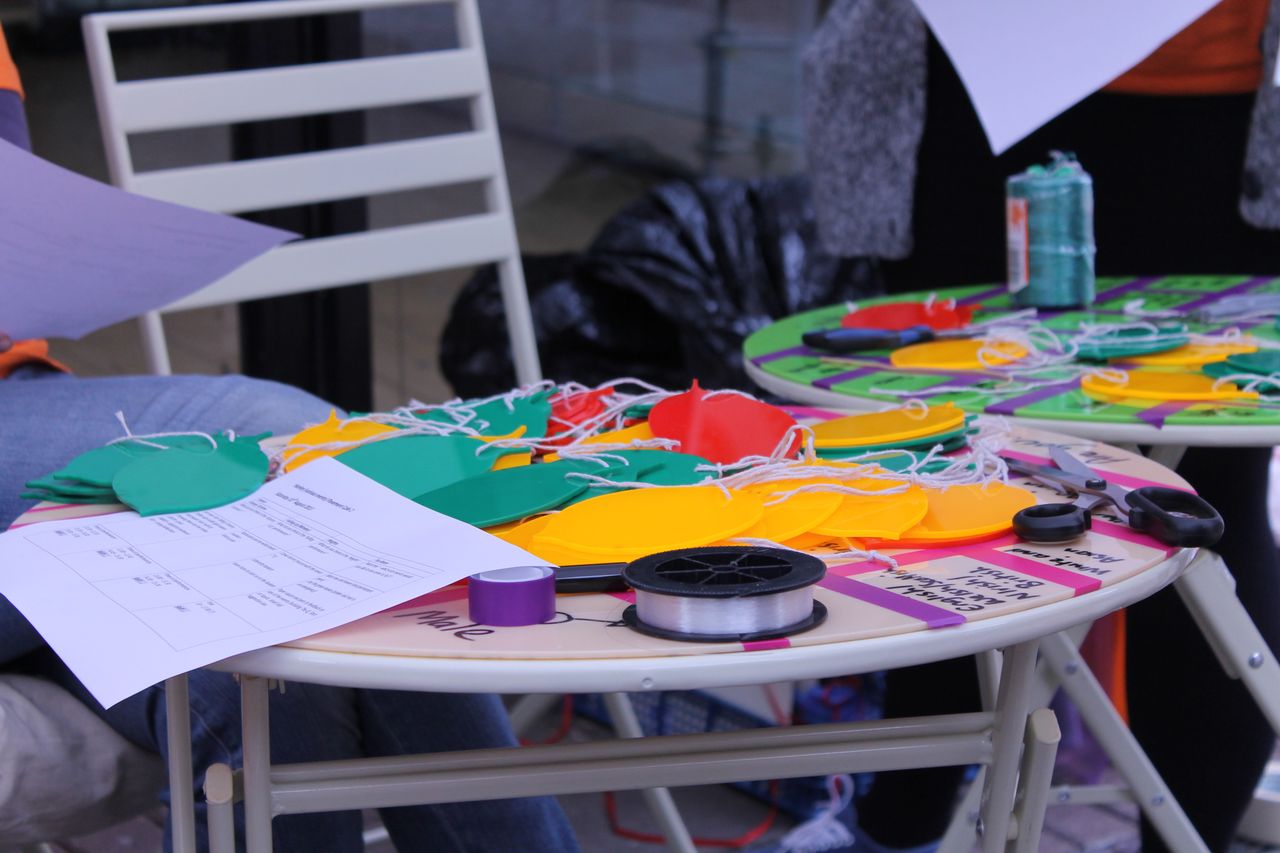 I knew or ‘expected’ the performances or whatever they might be on show to be bold, inclusive and varied and as well as the events themselves I wanted to capture what the ‘people’ thought both in voice and expression. We finally got Get Talking set up in the

Travelling Tea Room and were ready to ‘Get Talking’ with anyone and everyone when my eye was pulled by the vivid orange of a ‘bunch’ of people queuing around a fruit & veg stall…this was ‘Q’, a troop of  interactive performance artists, dressed head to toe in bright – you’ve been tango’d – orange. I watched intently (forgetting at first to capture any photos as the curiosity was so intriguing) as more and more shoppers got sucked into the queue and then quickly dispersed as the ‘troop’ moved on – no fuss, no drama just ART!. From that moment I knew that this was going to be a very different animal to what had gone before…as workman in ‘high vis’ began to juggle red & white traffic cones, whilst two others took up in a wheelbarrow and proceeded to tape off areas of the town centre, whereby I narrowly avoided been taped up with a half dozen other unsuspecting members of the public. It became apparent that the theme of the day was ‘get involved’.

By lunch time the town centre was ‘a buzz’ with acts going off every half hour and intersected by the roaming performers, most audible of which were ‘Granny Turismo’ which was made up of two actors dressed hat to sensible shoes as, well…Grannies (be it a slightly painted idea of a ‘cosy’ granny) but to look below was to see in amazement their engine powered shopping trolleys and listen to all matter of ‘cranked up’ street music as they hilariously and elegantly ‘sped’ around the blocked paving dishing out high fives and posing for photos as they went. 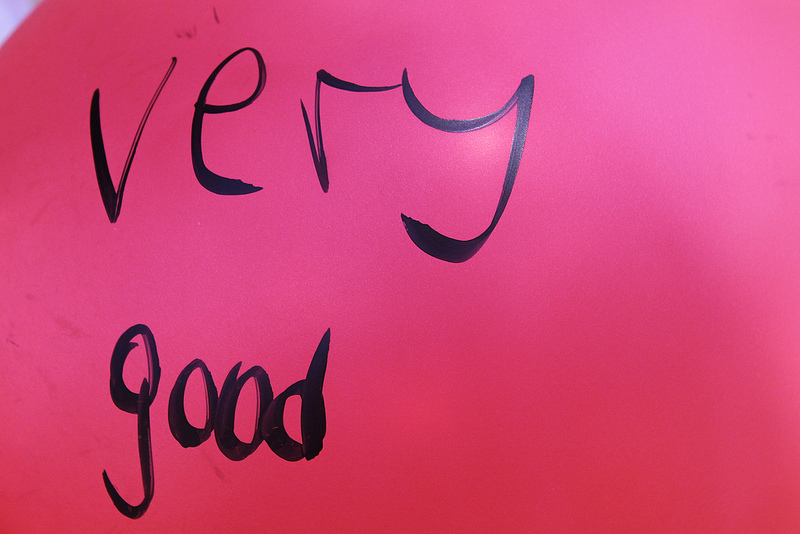 I could hear and see whistling, smiles and electric conversation all around  as I returned to the Travelling Tea Room a spoke to many a good ‘folk’ about what they’d seen, heard and felt…the response was fantastic.  Whether the fact that people were more prepared from the previous weeks or the fact that they’d been a part of the acts it mattered not, as their feedback flowed in to get more of ‘this sort of thing’ happening on a weekly basis and not just here but spread around their City. Speaking to passersby

I can still feel pride in how close the people of Stoke can be and how they will get behind such social and family events….fantastic! Then came my turn to ‘get involved’ as I took part in ‘Shirt or Squirt’ – two bikes, two people and lot of water, the name of the game to peddle as fast as you can and empty your own vile of water before the other person does. *Note – I won and narrowly avoided a drenching as I just edged out my energetic and gracious cycling competitor. 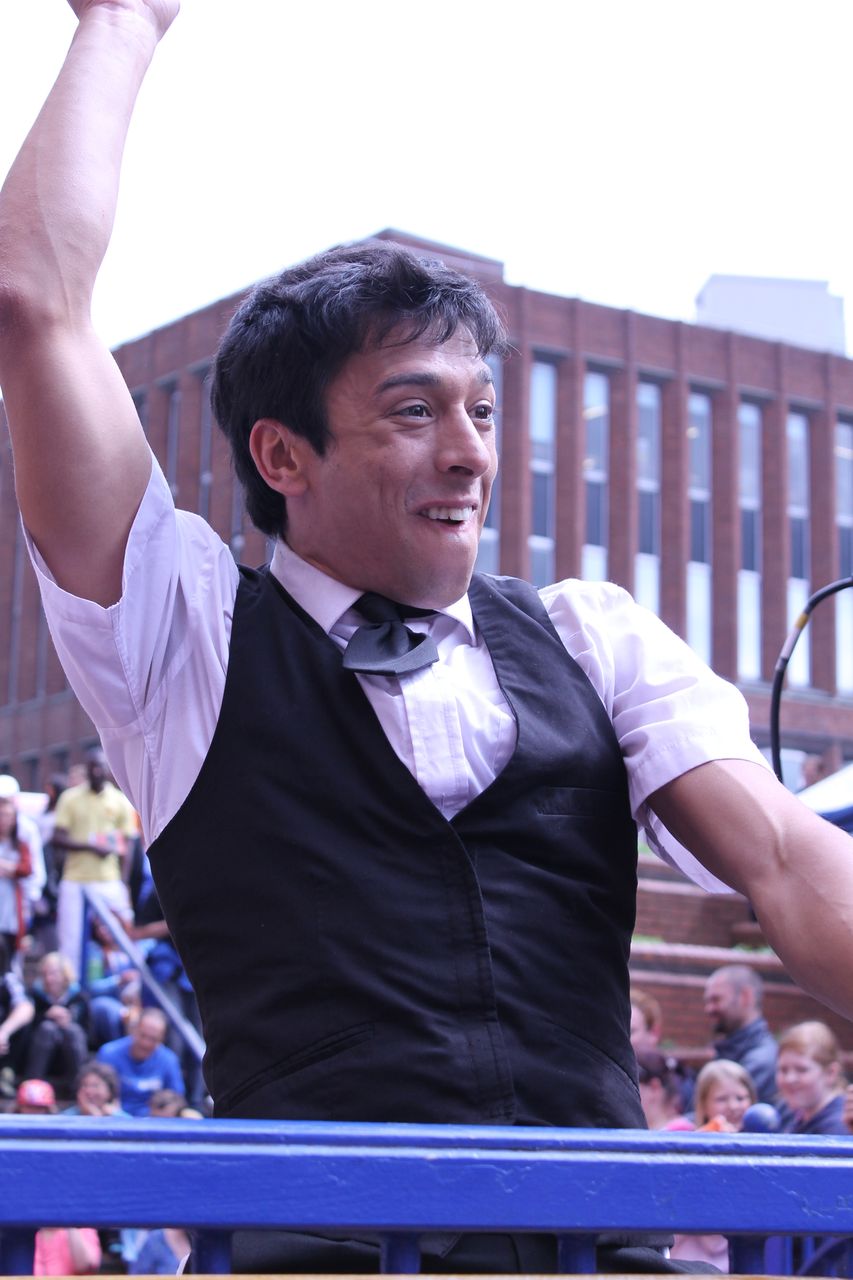 After I dried of and got my breath back I got to see;my personal pleasure of the day ‘The Heights’, three guys who gave a whole new spin on ‘clowning around’.  No face paint or water shooting from flowers… rather precision timed (Marx brothers style) acrobatics and charismatic audience participation, as they squabbled and argued over their performance, then dropping the execution without error and a three man high finale to end their and our fun. After three weekends (so far) Appetite has begun to get people talking about Art!

If you want to find out more about how Get Talking is helping communities in Stoke-on-Trent to engage in art through, or to become a Get Talking Network Volunteer, please contact us here